Romelu Lukaku and Marcus Rashford were the goal scorers for Manchester United. 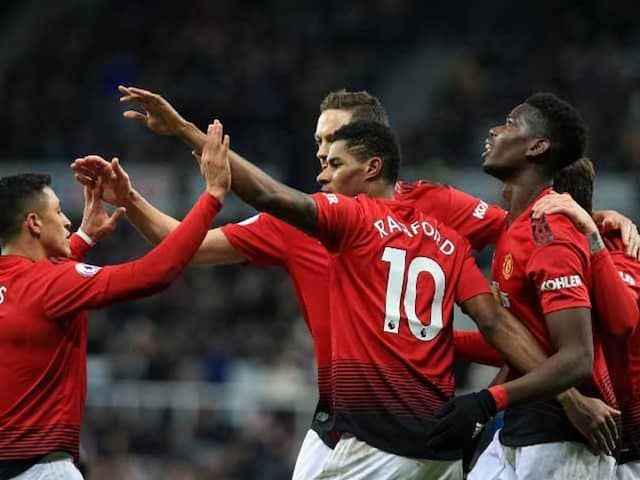 Ole Gunnar Solskjaer joined Matt Busby in the Manchester United record books on Wednesday as his inspirational decision to bring on Romelu Lukaku as a substitute paid immediate dividends in a 2-0 victory against Newcastle. The victory, secured after Lukaku scored with his first touch of the game in the 64th minute, clinched a fourth win in as many games for United's interim manager. And Solskjaer now joins United's iconic former leader Busby as the only other manager in the club's proud history to have started his career with four wins.

Lukaku pounced after Martin Dubravka had failed to hold onto Marcus Rashford's ambitious 25-yard free-kick, the Newcastle keeper spilling the ball for the alert substitute to covert from close range.

The Belgian also had a role in United's second, in the 80th minute, along with Alexis Sanchez, the former Arsenal striker who has been out for over a month and was brought on, along with Lukaku.

The two subs combined passes, as Newcastle pressed upfield in search of an equaliser, and Sanchez's precise pass found Rashford in space, the young England striker having the poise to calmly roll the ball past Dubravka.

After a miserable first half to the season under Solskjaer's predecessor Jose Mourinho, the win simply adds to the growing adoration being shown by United supporters towards their former player.

United's executive vice-chairman Ed Woodward, widely criticised for his part in the club's woes since the retirement of Alex Ferguson and their decline from the summit of the English game, had at least spotted the wisdom in his timing of Mourinho's dismissal earlier this month.

It presented the interim manager with three eminently winnable games against Cardiff, Huddersfield and Bournemouth -- victories which Solskjaer duly collected in some style.

But the visit to St James's Park, at the end of a busy holiday period, was always going to be one that offered a far greater challenge to the "new-look" United and the opening half certainly served as a timely reminder of how much work Solskjaer still has to do if he is to elevate this season to anything above the instantly forgettable.

Paul Pogba, involved in seven goals in the three games since Solskjaer took over, again looked a different player away from the stifling micro management of Mourinho.

His early shot tested Dubravka in the home goal but while there was plenty of intent on United's part there was little that truly concerned Rafa Benitez's side.

Instead, it was the struggling hosts who enjoyed the better of that first half, reminding Solskjaer, in case he needed it, of just how frail his new side can be defensively.

Twice, in quick succession midway through the first half, Christian Atsu pounced on poor defending although without really testing David de Gea.

United defender Phil Jones also contributed to the general unease at the back, needlessly giving the ball away on the edge of his own area before making up for the error with a brilliant tackle on Salomon Rondon.

The second half saw United step up their attacking game, Rashford soon twisting in from the by-line and shooting across the face of the goal.

And, although there was another promising flurry of Newcastle pressure, and a penalty appeal after Victor Lindelof tangled with Atsu, Solskjaer's double substitution proved pivotal.

Atsu, Newcastle's most dangerous performer, shot just wide of the United goal from a half-cleared free-kick after 75 minutes but Rashford's goal soon removed any lingering hope of a comeback.

And had Pogba not found the side-netting, instead of the goal, from a tight angle after rounding the keeper deep in injury-time, it might have been an even more emphatic victory.

Paul Pogba
Get the latest updates on IPL 2020, check out the IPL Schedule for 2020 and Indian Premier League (IPL) Cricket live score . Like us on Facebook or follow us on Twitter for more sports updates. You can also download the NDTV Cricket app for Android or iOS.