David Silva put City ahead after 10 minutes but they passed up a number of chances to add to the lead. 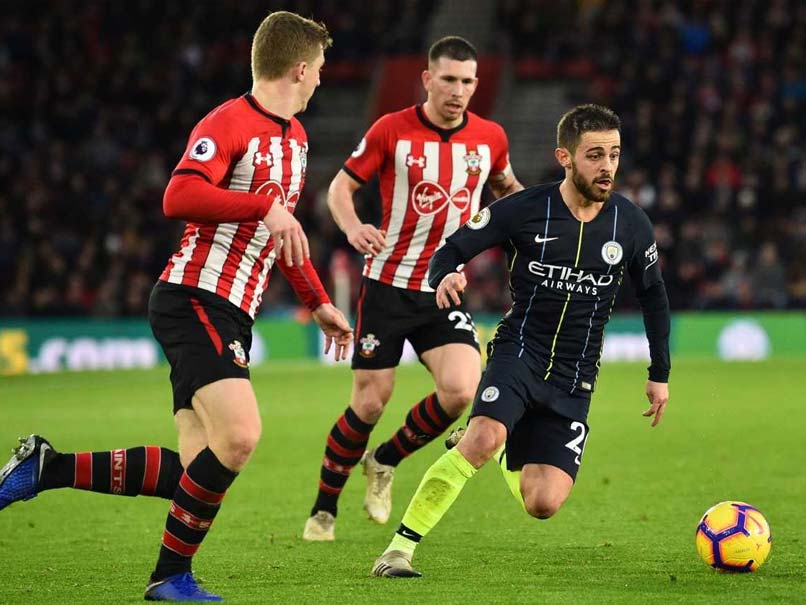 Manchester City showed they are willing to accept the challenge of Liverpool.© AFP

Manchester City showed they are willing to accept the challenge of Liverpool in the race for the Premier League title with a 3-1 win away to Southampton on Sunday. Following shock defeats by Crystal Palace and Leicester,reigning champions City cut the gap between themselves and Premier League leaders Liverpool to seven points ahead of their meeting with the Merseysiders at the Etihad Stadium on Thursday. But they allowed a limited Southampton side back into the game after a dominating start, which suggests there are still frailties for Liverpool to exploit.

David Silva put City ahead after 10 minutes but they passed up a number of chances to add to the lead and gifted Pierre-Emile Hojbjerg an equaliser in the 37th minute.

For a period, Pep Guardiola's side looked fragile, but a James Ward-Prowse own-goal and a header by Sergio Aguero just before half-time restored their confidence.

Saints' frustrations boiled over with a red card for Hojbjerg after a wild challenge on Fernandinho late in the game.

City should have gone ahead in the fifth minute when Jack Stephens allowed Raheem Sterling to steal possession and set up David Silva.

But the City man tried to be too deliberate, with his shot blocked by goalkeeper Alex McCarthy.

But Saints could also have taken a more surprising lead after eight minutes when Mohamed Elyounoussi's clever flick over the City defence sent Charlie Austin clear.

Austin's first touch, however, was dreadful and sent the ball into Ederson's grateful arms.

Instead of being a goal up, the home side were behind within a minute.

The left side of their defence was opened up with ease by a simple one-two, leaving Bernardo Silva clear of full-back Matt Targett and free to advance down the right. He had all the time he wanted to pick out the unmarked David Silva, who hit the ball first-time past McCarthy.

Riyad Mahrez then shot wide after a move that began with City playing a series of passes inside their own penalty area.

And Aguero squandered an excellent chance in the 25th minute, hitting his shot against McCarthy after Sterling had accelerated past the hapless Targett.

But overplaying at the other end almost proved City's undoing.

Ederson was nearly caught by Austin before dribbling round the striker. But he showed a mastery of the more conventional goalkeeping arts on the half-hour with a diving save to keep out Austin's glancing header from a corner by Ward-Prowse.

City did not heed the warning and Saints were level after 36 minutes.

Oleksandr Zinchenko was slow to see Hojbjerg closing in on him and the Southampton captain robbed the Ukraine defender and strode forward before lashing the ball in from 15 yards.

Zinchenko could count himself lucky that referee Paul Tierney did not see his barge on Ward-Prowse after 44 minutes as a penalty.

And the home crowd were still complaining about that decision when City retook the lead on the stroke of half-time.

Sterling forced his way down the left and fired in a low cross that hit the foot of Ward-Prowse and zipped between the surprised McCarthy and his near post.

And the crowd's disbelief was complete three minutes into first-half stoppage time when Aguero rose unchallenged by Jan Bednarek to nod Zinchenko's cross under McCarthy.

In the second half both sides went through the motions. City had the points they needed and Southampton were happy to avoid further damage to their confidence and goal difference. But even then City could have had three or four more goals.

Sterling shot straight at McCarthy, Aguero hit the angle of the post and crossbar, and Mahrez blasted straight at the goalkeeper.

Frustration got the better of Hojbjerg, who launched into a scissors-style challenge on Fernandinho and was rightly sent off.

Southampton English Premier League Southampton vs Manchester City, Game week 20 Football
Get the latest updates on IPL Auction 2023 and check out  IPL 2023 and Live Cricket Score. Like us on Facebook or follow us on Twitter for more sports updates. You can also download the NDTV Cricket app for Android or iOS.