In the other clashes, Manchester United beat Huddersfield 3-1 and Tottenham thrash Bournemouth 5-0. 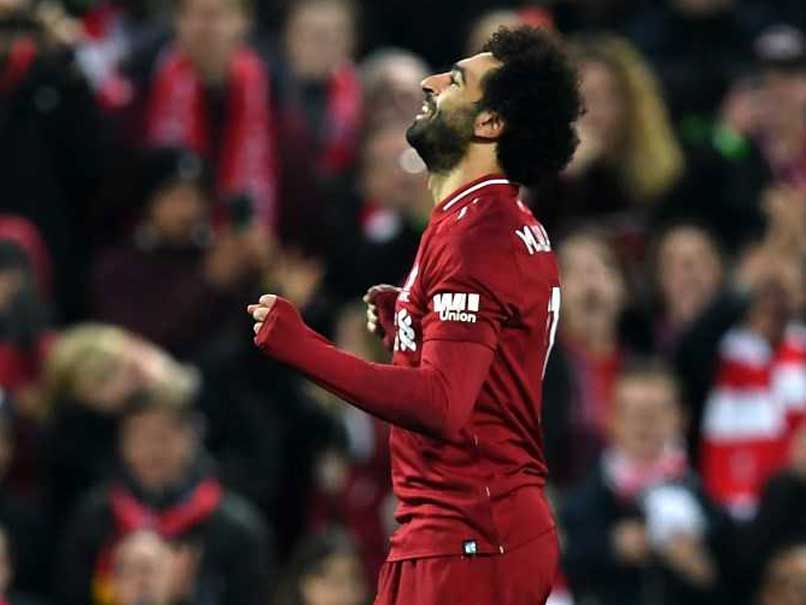 Mo Salah scored in the 47th minute for Liverpool against Newcastle United.© AFP

Liverpool moved six points clear at the top of the Premier League as the leaders eased past Newcastle 4-0 at Anfield and Manchester City were beaten for the second time in five days, 2-1 at Leicester. Tottenham leapfrog City into second after thrashing Bournemouth 5-0, while Manchester United's perfect start under caretaker manager Ole Gunnar Solskjaer continued with Paul Pogba scoring twice in a 3-1 win over Huddersfield.

Liverpool manager Jurgen Klopphas tried in recent days to stress that it is still far too early for his side to be talking of ending a near three-decade wait to win the title in December.
However, another routine win and a 12th clean sheet in 19 Premier League games will do little to dampen expectations ahead of a huge week for Liverpool with Arsenal visiting Anfield on Saturday before a visit to City on January 3.
After a slow start Liverpool went in front through an unlikely source when Dejan Lovren volleyed home after 12 minutes.

It was a far more familiar marksman who made the game safe when Mohamed Salah scored from the penalty spot two minutes into the second half to move into a three-way lead as the league's top scorer with Pierre-Emerick Aubameyang and Harry Kane. Xherdan Shaqiri and Fabinho's first Liverpool goal rounded off the scoring.

City boss Pep Guardiola made three changes from the side that lost 3-2 to Crystal Palace on Saturday with Sergio Aguero and Kevin De Bruyne returning, but even they couldn't prevent a third defeat in four Premier League games.
Aguero set up Bernardo Silva to give the champions a perfect start, but Marc Albrighton levelled just five minutes later. City dominated possession throughout, but after Andros Townsend's incredible volley for Palace on Saturday they were hit by another wonder strike when Ricardo Pereira fired home nine minutes from time.

A terrible afternoon for City was compounded by a red card for Fabian Delph late on.

As City flounder, Spurs are firing back into the title race as Mauricio Pochettino's men have now scored 11 goals in four days. Fresh from a 6-2 hammering of Everton, Christian Eriksen, Son Heung-min and Lucas Moura put Tottenham 3-0 up before half-time at Wembley. Kane then got his goal just after the hour mark before Son recorded his second double in as many games. Pogba was again to the fore as Solskjaer's dream start continued unabated in his first outing in charge at Old Trafford.
Nemanja Matic tapped home from close range to give the hosts a half-time advantage.

Pogba provided three assists on his return to the starting line-up in a 5-1 win at Cardiff at the weekend after being benched towards the end of Jose Mourinho's reign.

And the French World Cupwinner showed the goalscoring threat he also poses from midfield by striking twice in 14 minutes as United moved back to within five points of the top four.
Everton bounced back from their Tottenham thrashing by inflicting similar punishment on Burnley with a 5-1 victory at Turf Moor as Lucas Digne scored two free-kicks and Yerry Mina, Gylfi Sigurdsson and Richarlison all netted for the Toffees.

At the bottom Cardiff moved three points clear of the relegation zone by holding out for a 0-0 draw at Crystal Palace.But Fulham remain rooted in the bottom three as Romain Saiss's late equaliser secured Wolves a share of the points in a 1-1 draw at Craven Cottage.

Manchester United Football English Premier League
Get the latest updates on ICC T20 Worldcup 2022 and CWG 2022 check out the Schedule, Live Score and Medals Tally. Like us on Facebook or follow us on Twitter for more sports updates. You can also download the NDTV Cricket app for Android or iOS.