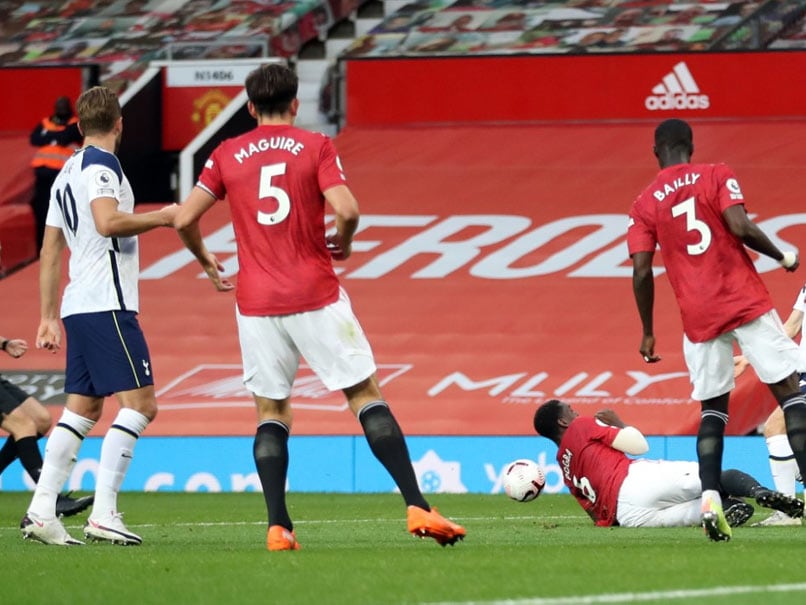 Luke Shaw gave a damning assessment of Manchester United as the defender admitted his side "gave up" in their "embarrassing" 6-1 defeat against Tottenham on Sunday. United suffered their heaviest defeat at Old Trafford since 2011 and Shaw had no qualms about accepting blame for the shambolic display. Ole Gunnar Solskjaer's men took the lead through Bruno Fernandes' second minute penalty, but still crumbled to one of the most humiliating results in the club's history.

United striker Anthony Martial was sent off with Tottenham leading 2-1, but left-back Shaw conceded there were no excuses for such a limp surrender.

"Manchester United shouldn't lose in this manner. It really hurts, it's embarrassing and we've let a lot of people down. We've let ourselves down and the staff down," Shaw said.

"We need to look in the mirror. We are nowhere near it at the moment. Maybe it's lucky that we've got a break now.

"When we went down to 10 men maybe we gave up, there wasn't that character on the pitch. We were too quiet and naive. There was many mistakes, we need to do more.

"I was embarrassed on the pitch. We need a long hard look at ourselves."

For the first time since 1986, United have lost their opening two home league games of the season.

It is just the third time in the Premier League era that they have conceded six goals.

Rubbing salt into the wounds it was former United boss Jose Mourinho, sacked in 2018, who was their tormentor.

The former United striker called the defeat the worst moment of his long association with the club.

"It's a horrible feeling, the worst day I've had as a Manchester United manager and player." he said.

"When we get the start we did you think, 'Yeah, we've got game where we want it' and then you make bad decisions.

"It's nowhere near good enough. I hold my hands up. It's my decision to pick the team I did. Also as a squad, that's not good enough for Manchester United.

"When you have a defeat like this you have to look yourself in the mirror."

Solskjaer did take a swipe at Tottenham's Erik Lamela for the exaggerated fall that led to Martial's dismissal.

"The boy might be having an operation on his throat! It is a bad reaction from Anthony. But if that was one of my players I'd hang him out to dry going down like that," Solskjaer said.

Solskjaer is expected to sign former Paris Saint Germain striker Edinson Cavani on a free transfer on Monday, but it is defensive recruits that United need.

"It is not about getting players in but who is here," Solskjaer said.

"At 4-1 down it is about character and personality. We had to close their avenues to goal but we didn't come out with any aggression.

"There are a lot of wrongs today. We need to look at everything."

Former United stars Gary Neville and Patrice Evra were both scathing about their old team's lack of fight.

"I can't believe we are where we are. There's no excuse for those players on that pitch because they were absolutely pathetic. Spineless in that second half," Neville told Sky Sports.

Evra added: "Make sure you realise you're embarrassing the club. Look in the mirror and be honest, you're an embarrassment."

Tottenham Hotspur Luke Shaw Football English Premier League
Get the latest updates on IPL Auction 2023 and check out  IPL 2023 and Live Cricket Score. Like us on Facebook or follow us on Twitter for more sports updates. You can also download the NDTV Cricket app for Android or iOS.