Kevin De Bruyne limped off in the closing minutes of City's 2-0 victory at the Etihad Stadium. 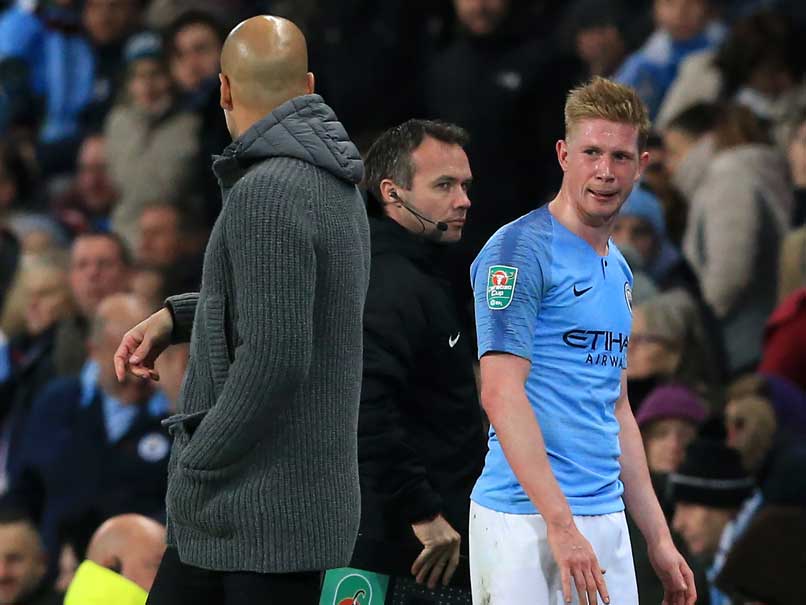 Kevin De Bruyne will be sidelined for up to six weeks.© AFP

Kevin De Bruyne will be sidelined for up to six weeks after the Manchester City star suffered knee ligament damage in Thursday's League Cup win against Fulham. De Bruyne limped off in the closing minutes of City's 2-0 victory at the Etihad Stadium after falling awkwardly in a clash with Timothy Fosu-Mensah. The 27-year-old had scans on Friday that revealed the left knee injury is serious enough that he is unlikely to be back in action until mid-December, although he does not require surgery.

"We are sad for him. Nobody likes to be injured. Unfortunately he is injured but fortunately it is not surgery," City manager Pep Guardiola told reporters on Friday.

"Football is football. It is a damaging game with a lot of contacts and this sometimes happens."

De Bruyne only recently returned from a right knee problem that forced him to miss two months this season, limiting the Belgium international to five appearances.

His absence during a busy period is a major blow for Premier League leaders City, who face crucial Champions League fixtures, the Manchester derby and a trip to Chelsea before De Bruyne is likely to be fit.

"The Belgian underwent scans on Friday at the CFA. No surgery is needed but he is expected to be out for between 5-6 weeks."

Manchester City English Premier League Kevin De Bruyne Football
Get the latest updates on Fifa Worldcup 2022 and check out  Fifa World Cup Schedule, Stats and Live Cricket Score. Like us on Facebook or follow us on Twitter for more sports updates. You can also download the NDTV Cricket app for Android or iOS.