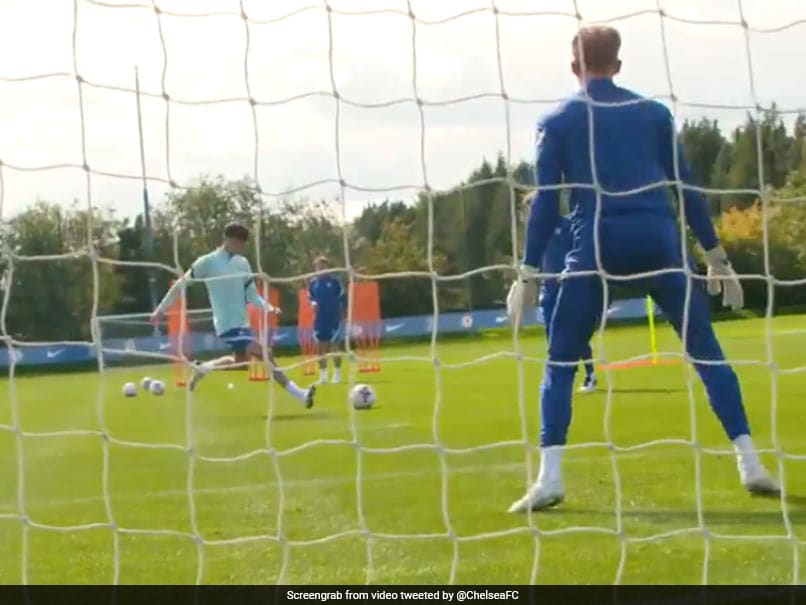 Kai Havertz showed some of his abilities in his first Chelsea training session.© Twitter

Kai Havertz recently completed his much-anticipated move to the Premier League, joining Chelsea. With Bayer Leverkusen sticking to their high transfer value of the 21-year-old, the deal cost the Blues 71 million pounds (including add-ons). The Germany midfielder has also become the club's second-most expensive signing, only behind goalkeeper Kepa Arrizabalaga (72 million pounds). Havertz played in his first club training session on September 7, with Chelsea posting some goalscoring highlights on Twitter. The video was captioned as, "Looks good to us! @KaiHavertz29".

Looks good to us! @KaiHavertz29

The footage posted on social media showed Havertz training at Cobham. He is shown taking a few shots with either foot, something reminiscent of head coach Frank Lampard's playing days.

Since making his debut for Leverkusen in the Bundesliga at the age of 17, Havertz has scored 46 goals in 150 competitive games. He also scored 18 goals last season. Leverkusen finished fifth in the league table, missing out on a UEFA Champions League spot.

His arrival has happened during a transfer window, where Chelsea have been on a spending spree, signing the likes of Hakim Ziyech (from Ajax for 36 million pounds) and Timo Werner (from RB Leipzig for 47.4 million pounds).

Usually deployed as an attacking winger or on the right flank, Havertz is known for his vision, dribbling, technique and overall intelligence. A two-footed football player, his playing style has drawn comparison to former Germany captain and Chelsea star Michael Ballack. During his developmental years, he was also compared to the likes of Lionel Messi and Mesut Ozil.

Chelsea English Premier League Frank Lampard Football
Get the latest updates on ICC T20 Worldcup 2022 and CWG 2022 check out the Schedule, Live Score and Medals Tally. Like us on Facebook or follow us on Twitter for more sports updates. You can also download the NDTV Cricket app for Android or iOS.