Chelsea signed Kai Havertz on a five-year deal for a reported fee of 71 million pounds from Bayer Leverkusen. 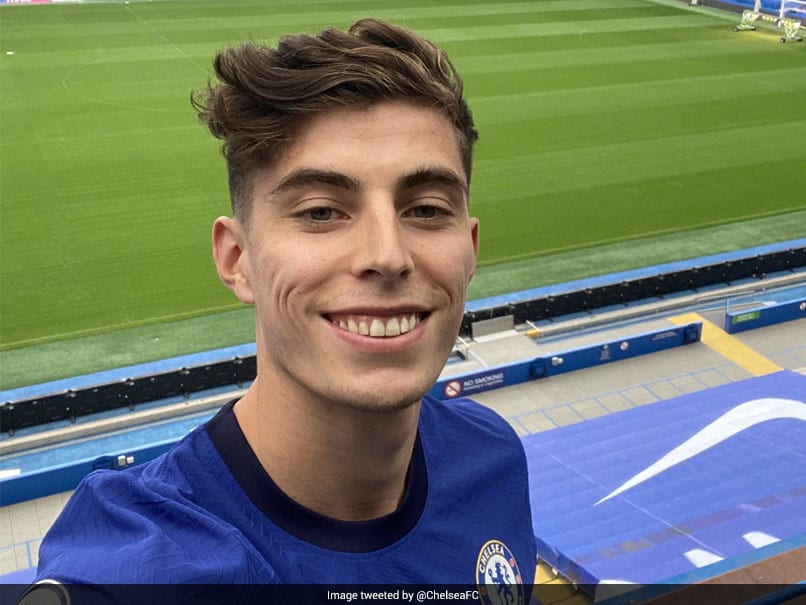 Chelsea took their summer spending spree to nearly 200 million pounds with the signing of German international Kai Havertz from Bayer Leverkusen on a five-year deal on Friday. Havertz's arrival at Stamford Bridge for a reported 71 million pounds ($94 million) is the Blues' latest statement of intent as they seek to cut the gap on Liverpool and Manchester City at the top of the Premier League. The 21-year-old, who can play as an attacking midfielder or as a forward, joins international teammate Timo Werner, Hakim Ziyech, Ben Chilwell and Thiago Silva in joining the club for Frank Lampard's second season in charge.

"I am very happy and proud to be here. For me it is a dream come true to play in a big club like Chelsea and I can't wait to meet all the players and the trainers," Havertz told the Chelsea website.

Havertz's move eclipses Werner's short-lived record as Germany's most expensive footballer after he joined Chelsea for 53 million euros in June.

That is not the only record Havertz has taken from Werner.

He succeeded the former RB Leipzig striker as the youngest player to make 50 and then 100 Bundesliga appearances since becoming Leverkusen's youngest ever player when he made his debut at 17.

He scored 46 goals in 150 competitive games for Leverkusen, including 18 last season, but that was not enough to lead them back into the Champions League as they finished fifth in the Bundesliga and went out in the quarter-finals of the Europa League.

Havertz was keen to make the move to a Champions League club and Chelsea moved quickly to secure his signature despite appearing to have more pressing concerns at the other end of the field.

"Kai is one of the best players of his age in world football, so we are very happy that his future lies at Chelsea," said Chelsea director Marina Granovskaia.

"He has proven pedigree in one of the best leagues in Europe, he plays for the German national side and he is an exciting, dynamic talent. We are delighted to be able to add his versatility and quality to the squad before the season begins."

Havertz's goal threat, physical attributes and ability to unlock a defence have earned him comparisons both to former Chelsea midfielder and Germany captain Michael Ballack and Arsenal playmaker Mesut Ozil.

"He is special. He is like a hybrid of Michael Ballack and Mesut Ozil," said former Manchester United and Bayern Munich midfielder Owen Hargreaves. "That says a lot in terms of his goals and elegance. He is a super player."

Huge things are expected of one of Europe's hottest prospects and Chelsea are making up for lost time in what they believe is a buyer's market due to the economic impact of the coronavirus pandemic.

A transfer ban meant Lampard was not given any money to spend in his first season in charge, while Chelsea also banked a club record fee last summer for Eden Hazard's departure to Real Madrid.

The spending spree also signals that Russian billionaire owner Roman Abramovich is still very much invested in his club's fortunes, even if he no longer resides in London.

There could yet be more new signings to come with a goalkeeper high on Lampard's wishlist.

Chelsea spent a world record 72 million pounds for a goalkeeper on Kepa Arrizabalaga just two years ago, but the Spaniard lost his place to 38-year-old Willy Caballero twice last season.

Bayer Leverkusen Frank Lampard Football
Get the latest updates on SA vs IND 2021-22, check out the Schedule and Live Score . Like us on Facebook or follow us on Twitter for more sports updates. You can also download the NDTV Cricket app for Android or iOS.