Tottenham Hotspur move above Liverpool into third in the Premier League, but it was a bittersweet victory with concerns over Harry Kane's fitness. 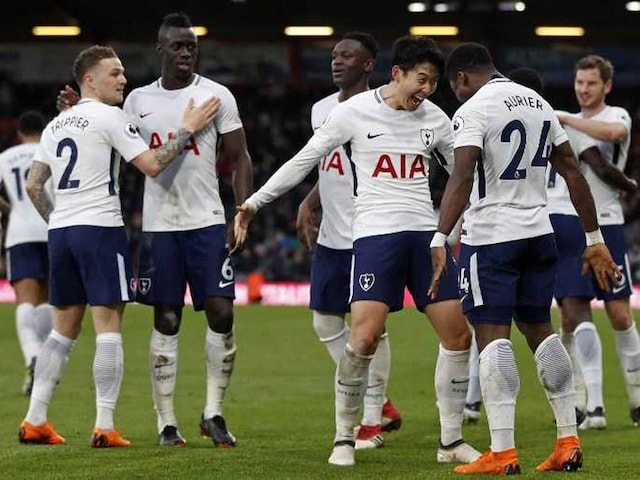 Tottenham leapfrogged Liverpool into 3rd place in the Premier League with the win over Bournemouth.© AFP

Son Heung-Min ensured Tottenham Hotspur didn't pay a heavy price for an ankle injury suffered by Harry Kane as he scored twice in a win 4-1 at Bournemouth on Sunday. Sixth-placed Arsenal were also comfortable 3-0 winners over Watford at the Emirates Stadium to snap a run of three straight Premier League defeats. Spurs move above Liverpool into third in the Premier League, but it was a bittersweet victory with concerns over Kane's fitness for both club and country. England manager Gareth Southgate will name his squad for friendlies against the Netherlands and Italy later this month on Thursday.

"We are concerned because still we can't know what will happen to him," said Spurs boss Mauricio Pochettino.

"We have to wait until tomorrow or after tomorrow for the scan for the reality. I hope it is not a massive problem. That is my wish."

Tottenham had endured a hugely disappointing UEFA Champions League exit at the hands of Juventus in midweek and still seemed to be reeling as they struggled in the opening 10 minutes.

Junior Stanislas had already hit the bar with a clear chance before he opened the scoring by firing low into the far corner just seven minutes in.

Kane did have the ball in the net when he collided with Asmir Begovic just before the half-hour mark, but the offside flag had already been raised.

And much worse was to come for the visitors when Kane failed to return as he limped away to protect the same right ankle that saw him spend two short spells on the sidelines last season.

The visitors always looked the likelier side to score after half-time and Son continued his scintillating form by acrobatically turning home Alli's cross.

And with Bournemouth pushing for an equaliser, the South Korean had acres of space to run through and slot home his 18th goal of the season three minutes from time.

"I think he is doing a fantastic season, the best season since he arrived," added Pochettino.

Indeed, only a super save from Begovic denied Son his hat-trick moments later.

But the Bournemouth 'keeper was at fault as he parried Kieran Trippier's cross into Aurier's path, and the Ivorian headed home Spurs' fourth in stoppage time.

Comments
Topics mentioned in this article
Tottenham Hotspur Bournemouth Harry Kane English Premier League Football
Get the latest Cricket news, check out the India cricket schedule, Cricket live score . Like us on Facebook or follow us on Twitter for more sports updates. You can also download the NDTV Cricket app for Android or iOS.