Arsene Wenger's side ended a run of three successive Premier League defeats with a solid display at the Emirates Stadium. 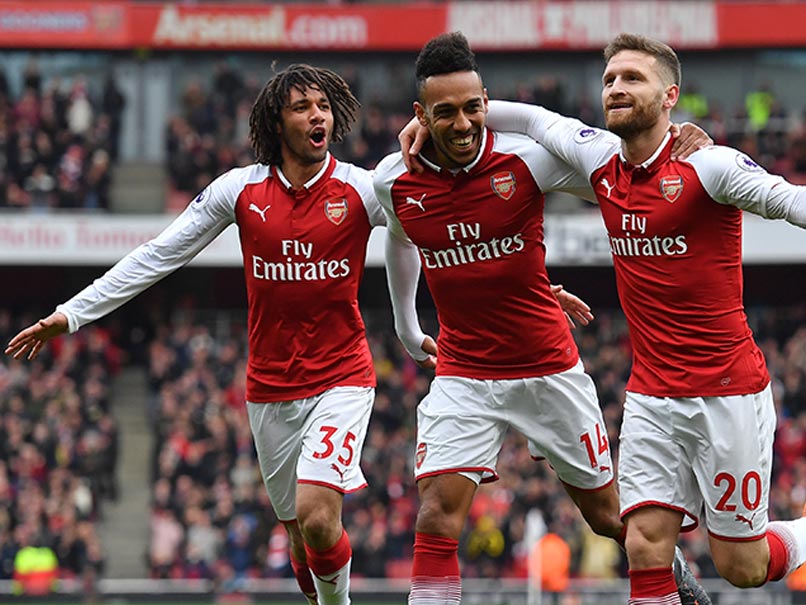 Manager Arsene Wenger received a welcome boost as Arsenal eased a little of the pressure on their beleaguered boss with a 3-0 thumping win over Watford on Sunday. After a wretched run left Wenger fighting to save his job, a 2-0 win at AC Milan in the Europa League on Thursday offered the Frenchman temporary respite from the torrent of abuse he has endured this season. Maintaining the momentum from that last-16 victory in the San Siro, Wenger's side ended a run of three successive Premier League defeats with a solid display at the Emirates Stadium. Shkodran Mustafi's early opener and a cool finish from Pierre-Emerick Aubameyang put them in control.

In a moment of sweet vindication, Watford captain Troy Deeney, who had questioned Arsenal's spirit earlier this season, had a second-half penalty saved by Petr Cech.

Henrikh Mkhitaryan's strike wrapped up the points, but there was concern for Wenger as Mustafi limped off in the closing stages.

Arsenal, who had lost eight of their previous 14 matches in all competitions, remain in sixth place and trail fourth-placed Tottenham by 10 points ahead of their rivals' trip to Bournemouth later on Sunday.

Winning the Europa League guarantees qualification for next season's Champions League and, with Arsenal's hopes of achieving that goal via a top-four finish looking bleak, it was no surprise Wenger prioritised the continental competition.

With the second leg against Milan looming on Thursday, Wenger rested Aaron Ramsey and Laurent Koscielny and left Jack Wilshere on the bench.

Aubameyang was one of the established stars who started for Arsenal and the Gabon striker should have opened the scoring when he raced onto Mesut Ozil's pass and shot straight at Watford goalkeeper Orestis Karnezis.

For the second successive home game, a significant amount of seats were empty as fans stayed away in protest at Wenger's woes.

The subdued atmosphere lent an 'end of an era' feel to the match, but it didn't bother Arsenal, who had a point to prove to Watford captain Deeney.

Deeney had infuriated Arsenal by accusing them of a lack of "cojones" after Watford beat Wenger's men in October.

Fuelled by that jibe, Arsenaltook the lead in the eighth minute.

When Ozil swung a deep free-kick towards the far post, Mustafi punished slack marking by Jose Holebas and Adrian Mariappa as the German defender powered a close-range header past Karnezis.

Watford weren't fazed and Abdoulaye Doucoure's low strike deflected off Mustafi to force a good save from Cech.

Cech alertly kept out Richarlison's dipping free-kick, but Roberto Pereyra should have done better than blaze the rebound over.

Ozil was equally profligate when he weaved through on goal, only to clip his shot too close to Karnezis.

There was less assurance about Arsenal towards the end of the half and Cech had to plunge to his left to save Richarlison's header.

But Watford couldn't take advantage and Granit Xhaka's 20-yard blast after the interval almost deceived Karnezis before he grabbed the ball just before it crossed the line.

With the momentum back in their favour, Aubameyang doubled Arsenal's lead in the 59th minute.

Mkhitaryan was the catalyst, slipping a pass to Aubameyang, who beat the Watford offside trap and rounded Karnezis before slotting in his third goal since his club-record move from Borussia Dortmund in January.

There was more cause for Wenger to wear a rare smile a few minutes later.

Ainsley Maitland-Niles conceded a penalty with a foul on Pereyra, but when Deeney stepped up to take the spot-kick, Cech made a fine save that preserved his 200th clean sheet in the Premier League.

Mkhitaryan bagged his second goal in successive matches with a low strike that crept under Karnezis in the 77th minute.

Comments
Topics mentioned in this article
Arsenal Watford Shkodran Mustafi Mesut Özil English Premier League Football
Get the latest updates on ICC T20 Worldcup 2022 and CWG 2022 check out the Schedule, Live Score and Medals Tally. Like us on Facebook or follow us on Twitter for more sports updates. You can also download the NDTV Cricket app for Android or iOS.