Olivier Giroud, who moved to Chelsea in January, believes the battle with Alvaro Morata is positive for the team. 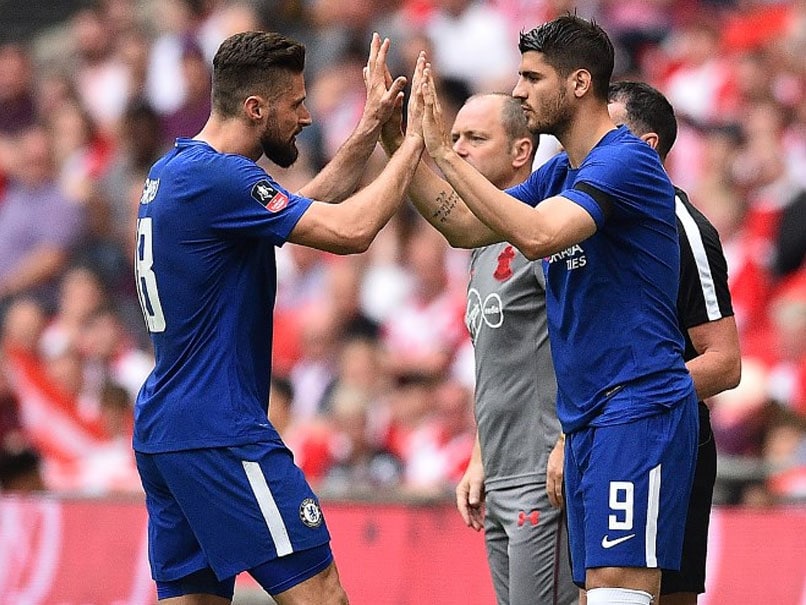 Olivier Giroud and Alvaro Morata are fighting for a starting spot in the Chelsea team.© AFP

Chelsea boss Maurizio Sarri has a tough decision to make over whether to pick Alvaro Morata or Olivier Giroud for a testing encounter with West Ham on Sunday. The Stamford Bridge club are top of the Premier League table after five wins out of five but the fixture list has been relatively kind to them so far. West Ham had a miserable start to their campaign but victory against Everton has lifted the mood and they will be further buoyed by last season's results against Chelsea -- when they took four points off their London rivals.

Belgian playmaker Eden Hazard has been the star man for Chelsea so far this season, scoring a hat-trick in their 4-1 demolition of Cardiff last week to lead the race for the Premier League Golden Boot.

But who will Sarri pick to lead the line at the London Stadium?

Up until last weekend Morata, 25, was getting the nod, with French World Cup winner Giroud -- a stronger physical presence -- consigned to the bench.

But Giroud got his chance against Cardiff and Hazard made no secret of his admiration for his teammate, hailing him as the world's best target man after the Frenchman laid on two goals for Hazard.

"Olivier's a target man, maybe the best in the world -- I think so," said Hazard, appearing to make it clear who he would prefer to see in the line-up.

"When he gets the ball he can hold the ball and we can go in deep with him, so for us it's a pleasure to play with him.

"When Alvaro (Morata) was playing it's completely different, he's a different player than Olivier, but they both have great qualities, so I'm happy to have good strikers in the team."

Spanish striker Morata was criticised last season over his lack of a killer touch after a bright start to his career at Chelsea and has only found the net once so far this season.

Sarri said he needs goals to boost his fragile confidence following Chelsea's 1-0 win against PAOK of Greece in their Europa League opener on Thursday, for which he was back in the starting line-up.

"Alvaro has to gain confidence with one, two, three goals," Sarri said after the victory, during which Morata missed a number of chances.

Giroud, 31, limited to substitute appearances before last week, is yet to score for Chelsea this season but already has three assists in the Premier League.

The former Arsenal player, who moved to Chelsea in January, believes the battle with Morata is positive for the team.

"It has always been a fair competition between us and we will both try to step up to help the team reach our target," he told London's Evening Standard.

"I'm happy to have a teammate like that, who pushes me to do better," he added. "It's positive for both of us. I want to play as many games as I can and try to be as efficient as I can for the team."

Olivier Giroud Álvaro Morata English Premier League Football
Get the latest updates on ICC T20 Worldcup 2022 and CWG 2022 check out the Schedule, Live Score and Medals Tally. Like us on Facebook or follow us on Twitter for more sports updates. You can also download the NDTV Cricket app for Android or iOS.