Arsenal star Mesut Ozil took to Twitter to celebrate his sides victory over Manchester United and included a dig at Jesse Lingard. 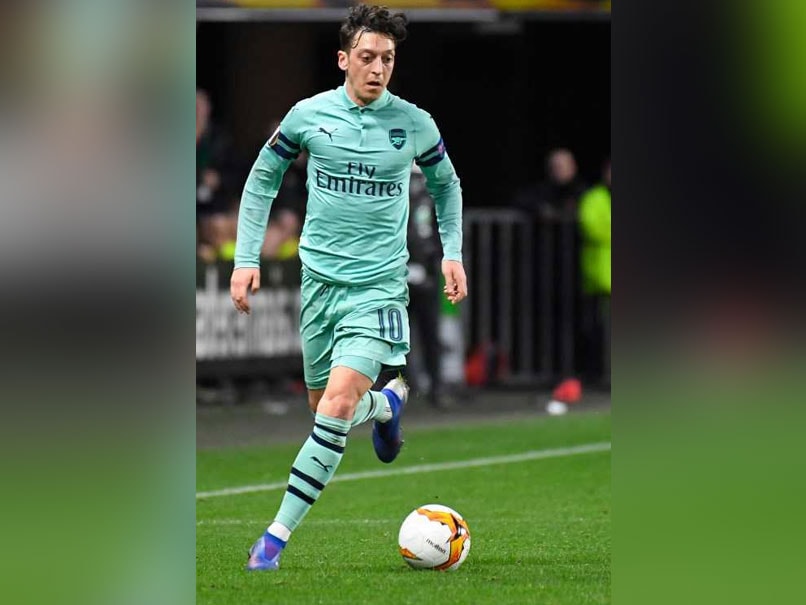 Mesut Ozil fired back at Jesse Lingard for his earlier "dancefloor" reference to the Emirates Stadium.© AFP

Mesut Ozil has taken a massive dig at Jesse Lingard after Arsenal's crucial 2-0 win over Manchester United in the Premier League on Sunday. Following the clash at the Emirates Stadium that helped Arsenal returned to the top four, Ozil took to Twitter and took potshots at his Manchester United rival. Lingard had in the past labelled Arsenal's stadium as his "dancefloor" on Instagram. Ozil took the opportunity to fire back after Sunday's win, tweeting: "Dancefloor huh!? Superb performance! Brilliant result! Thank you Emirates Stadium! Proud to be a Gunner!"

Jesse Lingard infuriated Arsenal's players when he launched into a 'moon-walk' in front of the home supporters to mark his goal in Manchester United's 3-1 FA Cup fourth-round win at the Emirates Stadium in January.

The Manchester United winger's flamboyant celebration was perceived as taunting and Arsenal were determined to get their own back when Ole Gunnar Solskjaer's side returned to north London on Sunday.

Lingard, who also scored twice in the Premier League clash at Arsenal last season, had irked fans by posting his recent celebration on Instagram with the location set as "dancefloor".

But Granit Xhaka's opener and Pierre-Emerick Aubameyang's penalty gave Arsenal the 2-0 win they craved at the weekend, ending Solskjaer's unbeaten domestic streak since taking charge at Old Trafford in December.

Making it even sweeter, Arsenal climbed above Manchester United into fourth place in the race to qualify for next season's Champions League.

Lingard missed the Arsenal vs Manchester United clash due to a hamstring injury.

Manchester United Mesut Ozil Jesse Lingard Arsenal vs Manchester United, Game week 30 English Premier League Football
Get the latest updates on ICC Women's Cricket World Cup 2022 and IPL 2022, check out the Schedule , Live Score and IPL Points Table. Like us on Facebook or follow us on Twitter for more sports updates. You can also download the NDTV Cricket app for Android or iOS.