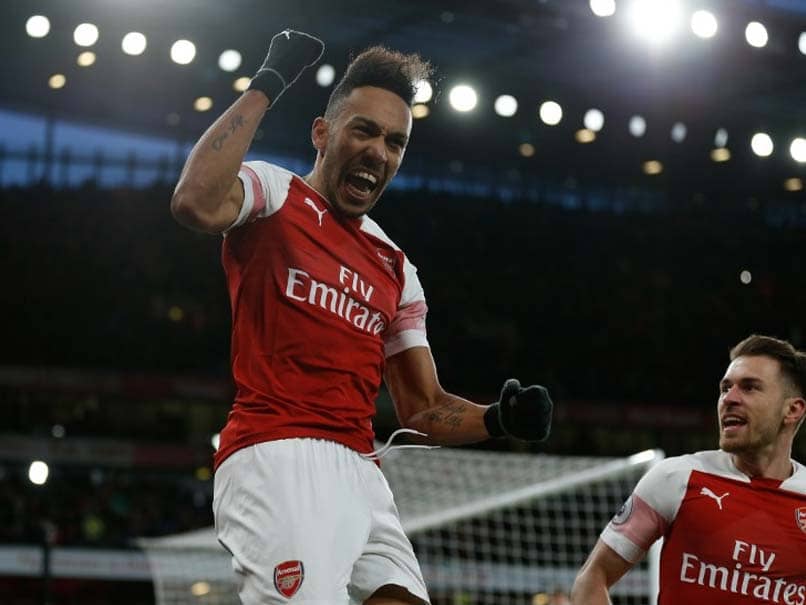 Arsenal's 2-0 victory lifted Unai Emery's side to within one point of north London rivals Spurs.© AFP

Liverpool cut Manchester City's lead at the top of the Premier League to a single point on Sunday as Manchester United slipped to their first domestic defeat under Ole Gunnar Solskjaer at Arsenal. Chelsea, also in the hunt for the Champions League qualification spots, needed a last-gasp equaliser from Eden Hazard to earn 1-1 draw against Wolves. A disappointing run of results has badly dented Liverpool's bid for a first English league title since 1990 and fans' nerves were jangling after they fell behind against struggling Burnley at Anfield on Sunday.

But Roberto Firmino and Sadio Mane both scored twice as Jurgen Klopp's team battled back to win 4-2, lifting them to 73 points, one behind Pep Guardiola's City, who saw off Watford on Saturday.

"The message from today is that nobody gets rid of us," said a defiant Klopp, whose team had won just two of their previous six Premier League matches. "We had the perfect mixture of fighting the opponent and playing football.

"All we have to do is make sure that we stay in this really interesting competition on top of the table. We have no problem with confidence, we're in a good moment."

Tottenham's third defeat in four Premier League matches on Saturday has thrown the race for the top four -- the passport to the Champions League -- wide open.

United travelled to the Emirates Stadium brimful of confidence after their astonishing Champions League comeback against Paris Saint-Germain in midweek and without a single domestic defeat since interim boss Solskjaer took over in mid-December.

United came back strongly but were unable to take their chances, thwarted by Bernd Leno in the Arsenal goal.

The home side doubled their lead midway through the second half when Pierre-Emerick Aubameyang scored from the penalty spot after Fred was penalised for bringing down Alexandre Lacazette.

Arsenal's 2-0 victory lifted Unai Emery's side to within one point of north London rivals Spurs and meant they leapfrogged United in the process as they target a return to the Champions League after two seasons away from Europe's top club competition.

Earlier, Hazard came to Chelsea's rescue in injury time, firing in from long range to grab a point as they drew 1-1 with Wolves at Stamford Bridge.

Chelsea enjoyed the bulk of the possession but Wolves took the lead through Raul Jimenez in the 56th minute with their first shot on goal after an incisive counter-attack.

Gonzalo Higuain, Pedro and Cesar Azpilicueta all had chances as the hosts pressed for an equaliser, but Wolves held firm, until Hazard rifled in a superb strike  from the edge of the area two minutes into added time.

Chelsea remain in sixth place, on 57 points, but manager Maurizio Sarri is confident his team can secure Champions League qualification.

"When you have to play only 10 matches, every match you're not able to win is a missed opportunity," he said.

"In the last six matches, we won four matches and drew the other two. So there is a little consistency in this moment. We have one match in hand, so we have to have be confident."

City beat Watford 3-1 on Saturday thanks to Raheem Sterling's 13-minute hat-trick but Spurs, on the fringes of the title race just two weeks ago, slumped to their third Premier League defeat in just four games against Southampton.

There were also wins on Saturday for Brighton, Cardiff, Bournemouth, Leicester and Newcastle.

Manchester United Football English Premier League
Get the latest updates on IPL 2021, IPL Points Table , IPL Schedule 2021 , live score . Like us on Facebook or follow us on Twitter for more sports updates. You can also download the NDTV Cricket app for Android or iOS.