A 4-2 victory over Burnley hauled Liverpool back to within a point of Premier League leaders Manchester City. 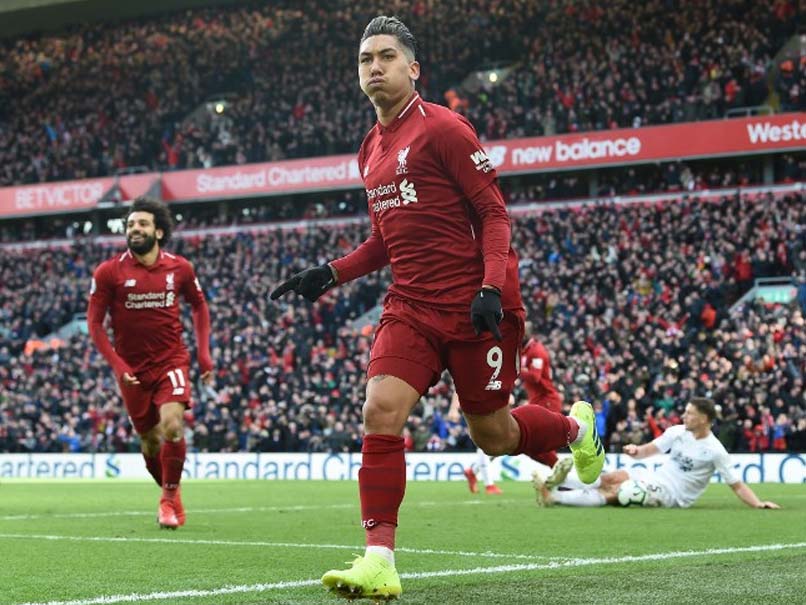 Roberto Firmino had a large role to play in steadying Liverpool nerves.© AFP

Roberto Firmino returned to goalscoring form at the perfect moment for Jurgen Klopp's Liverpool, hitting the net twice in a 4-2 victory over Burnley that hauled them back to within a point of Premier League leaders Manchester City. Sadio Mane was also on the scoresheet twice in a game in which Liverpool were required to respond to falling a goal behind against Sean Dyche's struggling side.

And with City having opened a four-point gap over Liverpool, with a victory over Watford on Saturday, the pressure was clearly on Klopp and his players to respond, which they did impressively despite the controversial manner of Burnley's opening goal.

Firmino had a large role to play in steadying Liverpool nerves, taking his league tally for the season to 11 and ending a six-game goal drought as his side reacted impressively to going a goal down in the sixth minute.

Defender Joel Matip needlessly conceded a corner which Ashley Westwood took from the left wing and curled directly into the Liverpool goal, with home goalkeeper Alisson protesting furiously that he had been impeded in his attempts to deal with it.

Replays suggested Alisson had a strong point, with defender James Tarkowski leaning on the Brazilian from behind and Jack Cork making contact in front of him. The goalkeeper's furious reaction, sprinting 40 yards to remonstrate with referee Andre Marriner, earned him a booking.

This was a real test of Liverpool's mental fortitude after a run that has seen them draw five of their previous seven games in the league and Champions League.

They trailed for just 13 minutes, equalising with a flowing move started when Mohamed Salah and Georginio Wijnaldum exchanged passes and the Egyptian drilled over a pacy near-post cross.

Burnley's England goalkeeper Tom Heaton and Tarkowski both had chances to clear but somehow allowed the ball to pass through them for Firmino to tap into an open net.

Liverpool were now firmly in control, clicking through the gears and placing the Burnley defence under increasing pressure before Mane shot them into the first lead of the afternoon shortly before the half hour.

The goal owed much to the persistence of midfielder Adam Lallana, who charged down an attempted clearance by Phil Bardsley, with the ball breaking for Salah, who was well tackled by Charlie Taylor.

The rebound fell for Mane, who curled a magnificent finish past the diving Heaton from 15 yards, scoring in a sixth consecutive home league game in the process.

It was hard to see a way back for struggling Burnley, who started the day just two points outside the relegation places as the second half quickly threatened to turn into a one-way procession towards the visitors' goal before Liverpool struck again midway through the second half.

Salah broke clear and was poised to shoot when Taylor made a superb tackle which, unfortunately for the visitors, left the loose ball sitting up neatly for Firmino to drive it into an open goal from 12 yards.

There was late anxiety after Johann Berg Gudmundsson made it 3-2 with an injury-time consolation after a knock-down in the area from Burnley substitute Peter Crouch.

But with virtually the last kick of the game in the 93rd minute, Mane chased a long through ball, rounded Heaton and completed the victory by kicking into the open goal.

Manchester City English Premier League Football Liverpool vs Burnley, Game week 30
Get the latest updates on ICC T20 Worldcup 2022, check out the Schedule and Live Score. Like us on Facebook or follow us on Twitter for more sports updates. You can also download the NDTV Cricket app for Android or iOS.