A statement from the FA also referred to two other clashes between Fellaini and Shawcross, but Halsey has confirmed he saw both and did not consider them violent conduct. 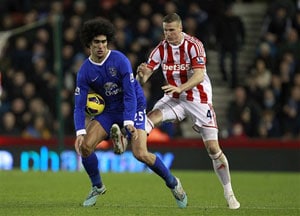 Everton midfielder Marouane Fellaini was given a three-match suspension on Monday after accepting a charge of violent conduct for headbutting Stoke's Ryan Shawcross.

Fellaini wasn't punished by referee Mark Halsey, who missed the incident which occurred in the 59th minute of Everton's 1-1 draw against Stoke at the Britannia Stadium on Saturday.

But the 25-year-old was charged retrospectively after the Football Association reviewed footage of his clash with Stoke defender Shawcross, who had grappled with the Belgian just before the incident as they prepared for a corner.

A statement from the FA also referred to two other clashes between Fellaini and Shawcross, but Halsey has confirmed he saw both and did not consider them violent conduct.

Fellaini had already apologised for his conduct and Everton manager David Moyes also condemned the incident.

"I apologise completely to Ryan Shawcross, my team mates and to our fans at the game," Fellaini said in a statement released soon after Saturday's match.

"There was a lot of pushing and pulling going on inside the Stoke penalty area and I didn't feel I was getting any protection from the officials.

"Nevertheless I know I shouldn't have done what I did. I have also apologised to the manager and the staff.

"I have no excuses. I was disappointed with the way I was being treated and I lost my temper, which was unprofessional of me."

Fellaini will miss the Toffees' busy Christmas schedule, which includes the next three games against West Ham on December 22, Wigan on Boxing Day and Chelsea on December 30.

He won't be available again until the trip to Newcastle on January 2 and his loss is a big blow to Everton's push to finish in the Premier League's top four.

The Belgium international has scored eight goals and been the driving force of a team currently fifth in the table.

Comments
Topics mentioned in this article
Football Marouane Fellaini Manchester City Alex Ferguson Mark Hughes Ryan Shawcross English Premier League
Get the latest updates on Fifa Worldcup 2022 and check out  Fifa World Cup Schedule, Stats and Live Cricket Score. Like us on Facebook or follow us on Twitter for more sports updates. You can also download the NDTV Cricket app for Android or iOS.