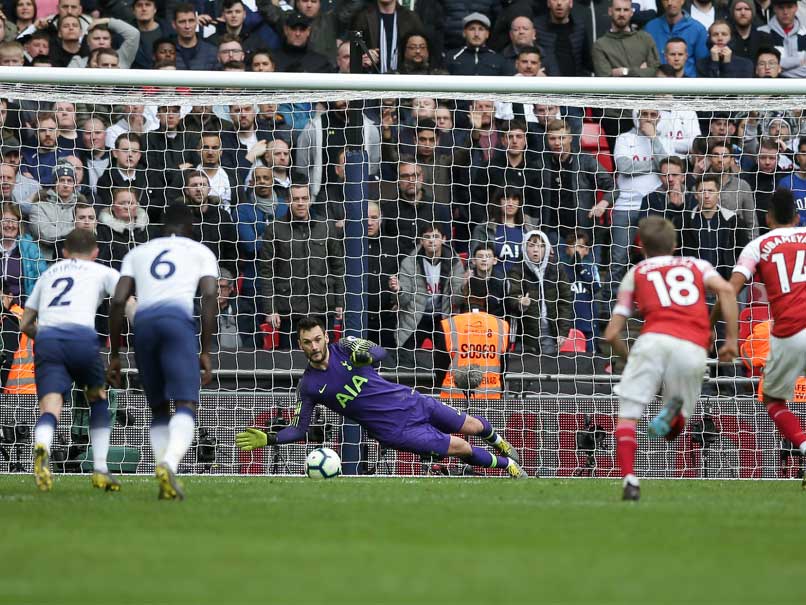 Mahrez fired Manchester City back to the top of the Premier League. Pep Guardiola's side sit two points above Liverpool thanks to Mahrez's second-half winner at Dean Court.

The only frustration for City in a hard-fought victory were injuries to Kevin De Bruyne and John Stones, which could significantly impact their bid to win an unprecedented quadruple.

De Bruyne hobbled off after the Belgian midfielder suffered a non-contact injury in the first half.

He has already been absent for long spells this season because of two different knee injuries.

But, showing the depth of City's squad, it was Mahrez, who had come on for De Bruyne, who finally gave the champions the lead in the 55th minute.

Liverpool can regain pole position if they win the Merseyside derby at Everton on Sunday.

At Wembley, Lloris saved a 90th-minute penalty as Tottenham salvaged a 1-1 draw in a pulsating derby.

Mauricio Pochettino's side fell behind in the 16th minute when Aaron Ramsey slotted home from Alexandre Lacazette's pass.

But Harry Kane won a controversial 74th-minute penalty to equalise for Tottenham.

Kane was offside when Christian Eriksen sent over a free-kick, but the flag stayed down and the England striker was bundled over by Shkodran Mustafi.

Kane calmly notched his 22nd goal of the season and his ninth in nine Premier League games against the Gunners.

Arsenal had a golden opportunity to take the points when Davinson Sanchez was penalised for a soft challenge on Pierre-Emerick Aubameyang.

Referee Anthony Taylor felt the minimal contact was enough to justify a penalty, but Lloris came to Tottenham's rescue as the France star dived to his right to keep out Aubameyang's low penalty.

Arsenal finished a bruising contest with 10 men after Uruguay midfielder Lucas Torreira was sent off for a studs-up foul on Danny Rose.

The dramatic finale ensured Pochettino, celebrating his 47th birthday, avoided a third successive defeat as Tottenham's record run of 33 league games without a draw came to an end.

Third-placed Tottenham remain four points ahead of Arsenal as the fight for Champions League qualification heats up.

Arsenal dropped to fifth place after Manchester United moved one point above them into fourth with a dramatic 3-2 win against struggling Southampton at Old Trafford.

Romelu Lukaku, back in form after a long barren spell, put United in front six minutes later with a composed finish.

However, in the 89th minute, Belgian forward Lukaku made it four goals in two games with the last-gasp winner.

Elsewhere, Crystal Palace pushed Burnley back into relegation danger with a 3-1 win at Turf Moor.

Palace went ahead in the 15th minute when Jeffrey Schlupp's cross was turned into his own net by Burnley defender Phil Bardsley.

Michy Batshuayi, on loan from Chelsea, doubled Palace's lead in the 48th minute.

Wilfried Zaha made it three in the 76th minute and Ashley Barnes's last-minute effort was no consolation for Burnley, who are five points above the bottom three.

Wolves eased to a 2-0 victory over Cardiff at Molineux that left the visitors stuck in the relegation zone.

Brighton boosted their survival bid as Florin Andone's 79th-minute winner secured a 1-0 victory over bottom-of-the-table Huddersfield at the Amex Stadium.

Hugo Lloris
Get the latest updates on T20 World Cup, check out the T20 World Cup Schedule and Live Score . Like us on Facebook or follow us on Twitter for more sports updates. You can also download the NDTV Cricket app for Android or iOS.