Sir Alex Ferguson has seen many a classics in his long stint as Manchester United manager. Here are some of them as a glittering career comes to an end. 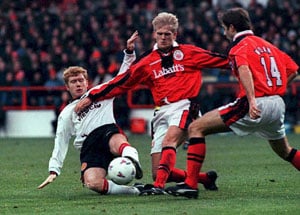 Manchester United supporters around the world were left in shock on Wednesday when manager Alex Ferguson announced that he will retire at the end of the season.

Here, AFP Sports picks out five matches that have played a pivotal role in shaping the Scot's glittering 26-and-a-half-year career at Old Trafford.

- After three years without a trophy since arriving from Aberdeen in November 1986, Ferguson was under growing pressure.

United had gone seven games without a win in the league and newspaper reports suggested he would be sacked if United did not beat Nottingham Forest in the third round of the FA Cup.

However, 20-year-old youth-team graduate Mark Robins notched the game's only goal with a 56th-minute header and United ended the season as FA Cup winners after beating Crystal Palace in a replay at Wembley Stadium. It was Ferguson's first trophy for United.

- Despite success in the FA Cup, the European Cup Winners' Cup and the League Cup, United were still without a league title since 1967, having lost out to Leeds United in the 1991-92 run-in.

However, Steve Bruce scored with two late headers at Old Trafford, sparking joyous pitch-side celebrations from Ferguson and his assistant, Brian Kidd, and setting United on course for the title.

- Having reached the first Champions League final of his United tenure, Ferguson looked destined to miss out on his personal Holy Grail after Bayern Munich took an early lead through Mario Basler at Barcelona's Camp Nou.

As full-time approached and Bayern's celebrations began, Ferguson sent on strikers Teddy Sheringham and Ole Gunnar Solskjaer from the bench.

Sheringham swept home a close-range equaliser in injury time before Solskjaer prodded a Sheringham flick-on into the roof of the net to complete one of the most thrilling comebacks in football history.

- Ferguson had seen off challenges from Arsenal's Arsene Wenger and Chelsea's Jose Mourinho to restore United as England's dominant force, but the prize he valued above all others remained the European Cup.

After a 1-1 draw with Chelsea on a rainy night at Moscow's Luzhniki Stadium, Chelsea captain John Terry had a chance to send the trophy to Stamford Bridge in the penalty shootout, but he slipped and fired the ball against the post.

Edwin van der Sar saved from Nicolas Anelka, and United were champions of Europe for a third time, the second under Ferguson.

- Manchester City's extraordinary last-gasp triumph in the 2011-12 Premier League title race only served to fuel Ferguson's hunger for success, and he quickly set about re-equipping his team by signing Robin van Persie from Arsenal.

City's title defence faded over the course of the following campaign and after Roberto Mancini's side lost at Tottenham Hotspur, United knew a win at home to Aston Villa would take the league crown back to Old Trafford.

Van Persie claimed a first-half hat-trick, including a stunning 20-yard volley for his second goal, to give United a 20th English league title and hand Ferguson his 49th managerial honour.

Comments
Topics mentioned in this article
Football Manchester City Chelsea Manchester United Arsenal FC Schalke 04 Alex Ferguson Jonny Evans Mark Hughes Ryan Giggs Wayne Rooney English Premier League
Get the latest updates on India vs Australia and check out  Schedule, Results and Live Score. Like us on Facebook or follow us on Twitter for more sports updates. You can also download the NDTV Cricket app for Android or iOS.