Liverpool move two points ahead of Manchester City, who still have a game in hand, at the top. 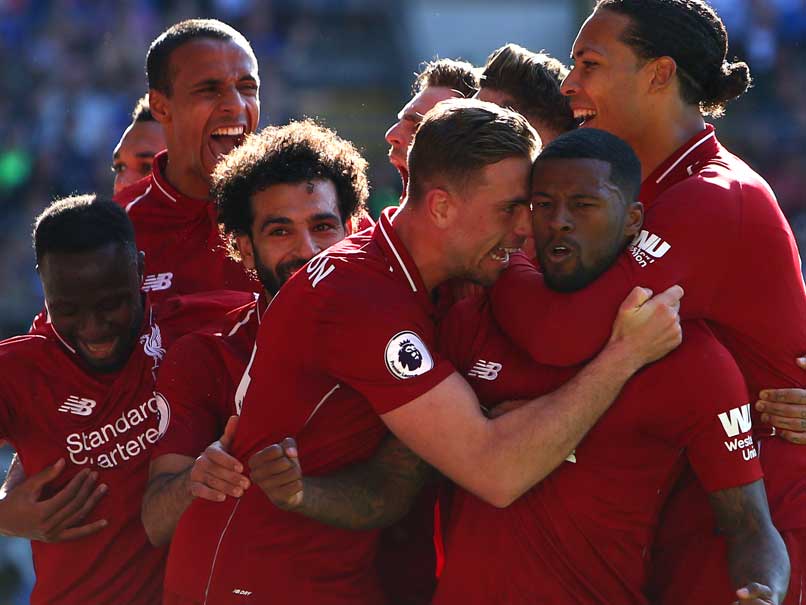 Liverpool moved back top of the Premier League with a 2-0 win at Cardif.© AFP

Liverpool moved back top of the Premier League with a 2-0 win at Cardiff, but Manchester United and Arsenal did little for their chances of Champions League qualification for next season in shock defeats to Everton and Crystal Palace respectively on Sunday. United were thrashed 4-0 at Everton to continue a miserable run of six defeats from their last eight games. Arsenal remain fourth, but failed to open up a five-point lead over United as Crystal Palace became the first visiting side to win at the Emirates in the Premier League since Manchester City on the opening weekend of the campaign with an impressive 3-2 victory.

Liverpool suffered no such slip ups to move two points ahead of Manchester City, who still have a game in hand, at the top.

Jurgen Klopp's men have now won their last nine games in all competitions, to also set up a Champions League semi-final against Barcelona.

But in keeping with recent weeks, Klopp could not relax until late on as Roberto Firmino and Mohamed Salah missed big chances to give the visitors a first-half lead.

Georginio Wijnaldum finally broke the deadlock in emphatic fashion with a thumping finish from Trent Alexander-Arnold's corner just before the hour mark.

Liverpool had to survive one major scare when Cardiff captain Sean Morrison failed to connect with his head when it seemed harder to miss with the goal at his mercy 26 minutes from time.

Morrison then compounded his error at the other end when he grappled with Salah inside the area and referee Martin Atkinson pointed to the spot, even though the Egyptian threw himself dramatically to the floor.

James Milner stepped up to bury the resulting penalty and ensure Liverpool are poised to strike if City stumble.

Unfortunately, for Klopp's side, United look in no fit state to inflict the blow on the champions they need come the Manchester derby on Wednesday.

Everton celebrated their biggest win over a shambolic Red Devils since 1984 to move up to seventh.

Richarlison's acrobatic effort and a long range effort from Gylfi Sigurdsson inside the first 28 minutes gave Everton the perfect start.

And they struck twice again early in the second-half through Lucas Digne and Theo Walcott.

"From the first whistle everything went wrong," said Solskjaer.

"I just want to apologise to the fans. They're the only people with the badge on today who can hold their heads high, because we can't."

And the Norwegian hinted that major changes are to come in the summer whether they reach the Champions League or not.

"We can't change the whole squad, it has to be one step at a time but I said all along, I'm going to be successful here and there are players who won't be part of that successful team."

Arsenal wasted a glorious opportunity to move above north London rivals Tottenham into third as after 10 straight home league wins, Palace shocked the Emirates with the three points that guarantees their survival.

Christian Benteke's first goal for a year put the Eagles in front before Mesut Ozil equalised early in the second half.

However, Shkodran Mustafi's blunder allowed Wilfried Zaha to put Palace back in front before James McArthur took advantage of more woeful Arsenal defending to make it 3-1.

Pierre-Emerick Aubameyang reduced the deficit, but it was too late to stop Palace's first league win at Arsenal since October 1994.

Arsenal English Premier League Football Cardiff City vs Liverpool, Game week 35
Get the latest updates on IPL 2021, check out the IPL 2021 Schedule and Indian Premier League Live Score . Like us on Facebook or follow us on Twitter for more sports updates. You can also download the NDTV Cricket app for Android or iOS.