The win over Burnley moved Everton up to eighth and to within a single point of Wolves in seventh. 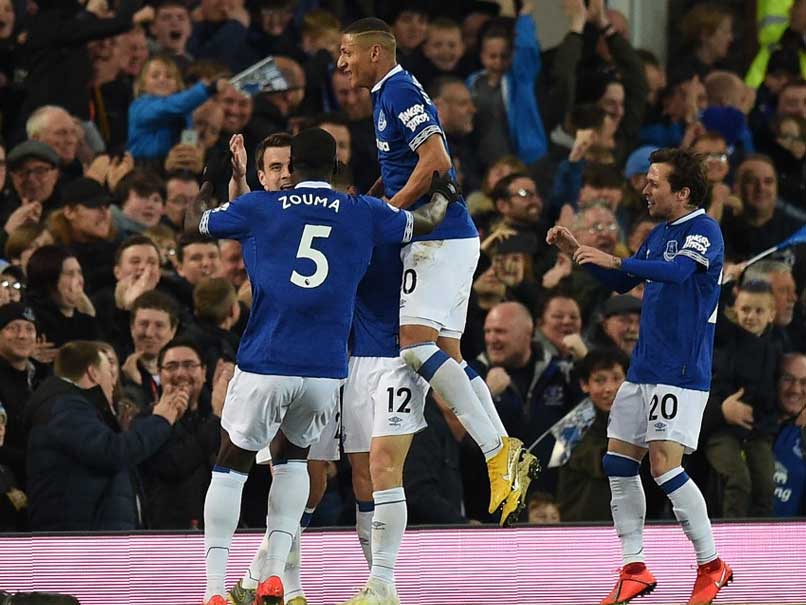 Everton kept their slim hopes of a top-seven finish in the Premier League alive.© AFP

Everton kept their slim hopes of a top-seven finish in the Premier League alive as they recorded a fourth consecutive victory at Goodison Park by defeating Burnley on Friday. The Toffees have seen off Chelsea, Arsenal and Manchester United on their patch recently -- by an aggregate score of 7-0 -- and two goals in three first-half minutes proved decisive against the Clarets. Burnley defender Ben Mee got a telling final touch to Richarlison's strike while Seamus Coleman headed in on the rebound as Everton ran out 2-0 winners in both sides' penultimate fixture of the campaign.

The win moved Everton up to eighth and to within a single point of Wolves in seventh -- a position that will seal a Europa League berth next season if Manchester City beat Watford in the FA Cup final later this month.

Wolves could extinguish coach Marco Silva's stated aim of European football with a win over already relegated Fulham on Saturday but this was an impressive way to sign off at home from Everton.

Just as it seemed the visitors had weathered the early onslaught, they fell behind in the 17th minute as their backtracking defence gave Richarlison an invitation to rifle beyond Tom Heaton.

The Brazilian's left-foot strike from the edge of the area took a slight deflection off the unfortunate Mee, and Burnley's luck worsened as Everton increased their lead moments later.

Lucas Digne's rasping effort from a similar distance was parried back into the danger zone by Heaton, allowing Coleman, just onside, to stoop to head into an empty net.

Everton's second seemed to rouse Burnley, who thought they had pulled one back when Ashley Barnes expertly steered Robbie Brady's ball into the area across Jordan Pickford, only for the assistant referee to flag for offside.

Burnley showed more purpose in the early stages of the second half than they did in the whole of the opening 45 minutes.

Chris Wood's low first-time strike was saved by Pickford while Brady's teasing ball into the area caught Johann Berg Gudmundsson unawares, leading to the ball spooning over the bar.

Burnley could not find a way back into the match, with Everton claiming an eighth clean sheet in their past 10 top-flight fixtures.

Manchester City Seamus Coleman English Premier League Everton vs Burnley, Football
Get the latest updates on ICC Women's Cricket World Cup 2022 and IPL 2022, check out the Schedule , Live Score and IPL Points Table. Like us on Facebook or follow us on Twitter for more sports updates. You can also download the NDTV Cricket app for Android or iOS.