European Football, Survival Up For Grabs In Premier League Finale

Manchester United and Leicester face each other in a shootout for a place in the Champions League next season with Chelsea also hoping to secure their place in the top four. 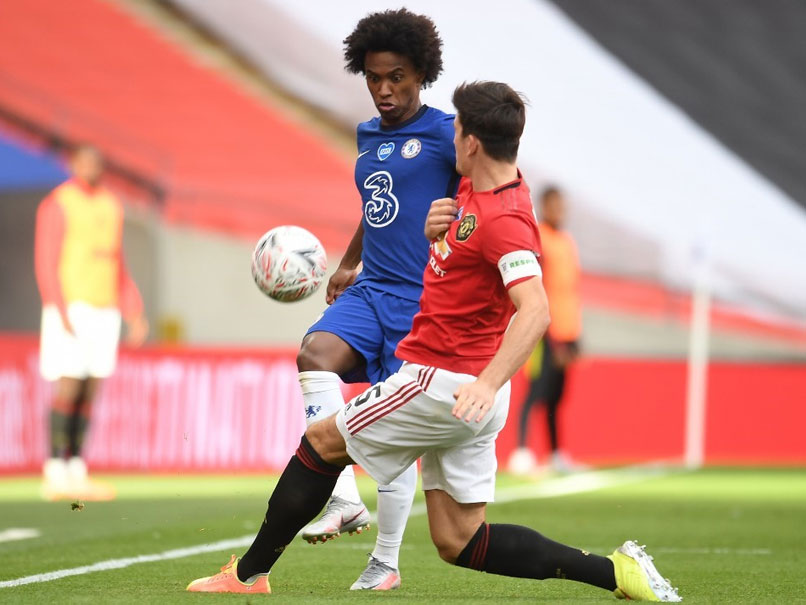 Man United and Chelsea's failures to win on Wednesday means the door is still open for Leicester.© AFP

The Premier League will finally reach the end of its longest season on Sunday with plenty still on the line at both ends of the table. Manchester United and Leicester face each other in a shootout for a place in the Champions League next season with Chelsea also hoping to secure their place in the top four. Wolves and Tottenham are vying for one place in the Europa League. And at the bottom it could not be closer with one goal separating Aston Villa just outside the relegation zone from Watford in the bottom three, while Bournemouth also have a chance of beating the drop.

Leicester fell out of the top four for the first time since September in midweek after a run of three wins in 13 games either side of the coronavirus shutdown.

However, United's and Chelsea's failures to win on Wednesday means the door is still open for Brendan Rodgers's men to salvage all the good work they did early in the season with victory on home soil on Sunday.

Leicester are hampered by injuries to James Maddison, Ben Chilwell and Ricardo Pereira, but have had a full week to prepare in stark contrast to United's packed schedule.

Ole Gunnar Solskjaer's men have looked jaded in the past week in losing 3-1 to Chelsea in the FA Cup semi-finals and being held 1-1 at home by West Ham.

United have overturned an eight-point deficit to Leicester since the restart, but Rodgers is hoping it is the Red Devils who fold under the pressure.

"We would love to be able to do that but when you are a club like Manchester United, or one of those super clubs, there is a need to be in the Champions League for many reasons," said Rodgers.

Chelsea just need a point at home to Wolves to seal Champions League football next season, but should Frank Lampard's men lose, then a draw between Leicester and United would see the latter two finish in the top four.

Whoever misses out on the Champions League between United, Chelsea and Leicester will be guaranteed fifth and a place in the Europa League next season.

Wolves are looking to go one better than their fine first campaign back in the top-flight last season by finishing in the top six and have the potential to upset Chelsea's push for the Champions League at Stamford Bridge.

However, any slip from Nuno Espirito Santo's men would give Spurs the chance to move into sixth.

Jose Mourinho's side have won their last three and will be confident ahead of a trip to Crystal Palace, who have lost their last seven games.

Seventh could still be good enough for European football next season, but that depends on Chelsea beating Arsenal in the FA Cup final on August 1.

At the bottom, two of Bournemouth, Watford and Villa will join already relegated Norwich in the Championship next season.

Villa have the upper hand with a three-point lead on Bournemouth and a marginally better goal difference than Watford.

Dean Smith's men also have momentum after a 1-0 win over Arsenal on Tuesday and travel to a West Ham side now sure of their place in the Premier League next season.

"Results went our way in the week and we're above the dotted line at the moment," said Smith.

"The most important thing is to be above that dotted line on Sunday and we know we have to win to guarantee that."

Watford's sacking of Nigel Pearson with just two games of the season remaining did the Hornets little good in a 4-0 thrashing at the hands of Manchester City on Wednesday and they travel to Arsenal needing to better Villa's result.

Should both lose then Bournemouth could extend their five-season stay in the top-flight by beating Everton at Goodison Park.

"The next game is the biggest game of all our careers," said Bournemouth boss Eddie Howe.

Aston Villa English Premier League Football
Get the latest updates on Fifa Worldcup 2022 and check out  Fifa World Cup Schedule, Stats and Live Cricket Score. Like us on Facebook or follow us on Twitter for more sports updates. You can also download the NDTV Cricket app for Android or iOS.