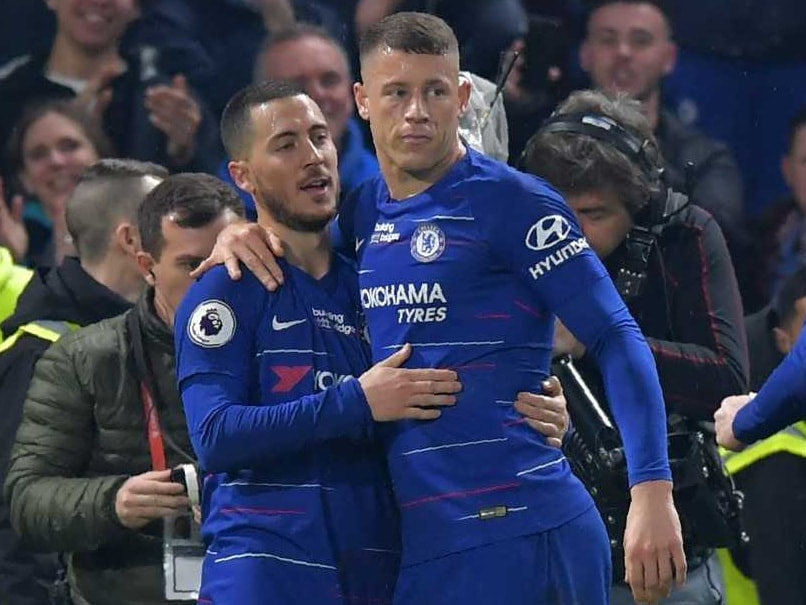 Eden Hazard scored a breathtaking solo goal in first half, which was followed by a 90th-minute strike.© AFP

Rden Hazard was in stunning form as the Chelsea moved up to third in the Premier League, scoring both goals in a 2-0 win over West Ham at Stamford Bridge on Monday. He admitted his first goal was "something special" as after collecting the ball just inside the West Ham half, Hazard jinked past three defenders before coolly slotting home. However, Chelsea may be forced to cash in on their prized asset as their number 10 has just over one year left on his contract and has so far refused to extend his deal.

Should they refuse to sell this summer, Chelsea run the risk of losing their top scorer on a free transfer in 2020.

Both their London rivals and Manchester United -- five points back in sixth -- now have a game in hand on Sarri's men.

But Hazard insisted he is focused solely on delivering Champions League football for Chelsea next season either via a top-four finish or winning the Europa League.

"For now I am just focusing on Chelsea until the end of the season," he said.

"I want to finish in the top four and do well in the Europa League. We still have a lot to do and then we will see."

With trips to Liverpool and Manchester United to come in Chelsea's last five league games, much will depend on Hazard with Gonzalo Higuain showing little sign of hitting form.

The Argentine striker stated his desire before kick-off to make his move permanent should Chelsea successfully appeal their transfer ban, but he had another night to forget in front of goal.

"When Hazard is able to play like in the last two matches of course for the team it is easier," manager Maurizio Sarri said. "We can win against every team."

Having failed to muster a single attack of note before the break, West Ham sparked into life in the second half and could have made Chelsea pay for their failure to kill the game off.

Marko Arnautovic's clever cut-back picked out the unmarked Manuel Lanzini at the edge of the box, but his shot was too close to Kepa Arrizabalaga before Aaron Cresswell then arrowed a shot inches wide of the far post.

Sarri was growing increasingly frustrated on the sidelines as Chelsea continued to miss chances to make the game safe.

But the Italian was finally able to relax in stoppage time when Hazard was given acres of space to control Ross Barkley's pass and produced the finish to match his performance.

West Ham United Eden Hazard Ross Barkley English Premier League Chelsea vs West Ham United, Game week 33 Football
Get the latest updates on India vs South Africa and check out  Schedule, Results and Live Score. Like us on Facebook or follow us on Twitter for more sports updates. You can also download the NDTV Cricket app for Android or iOS.