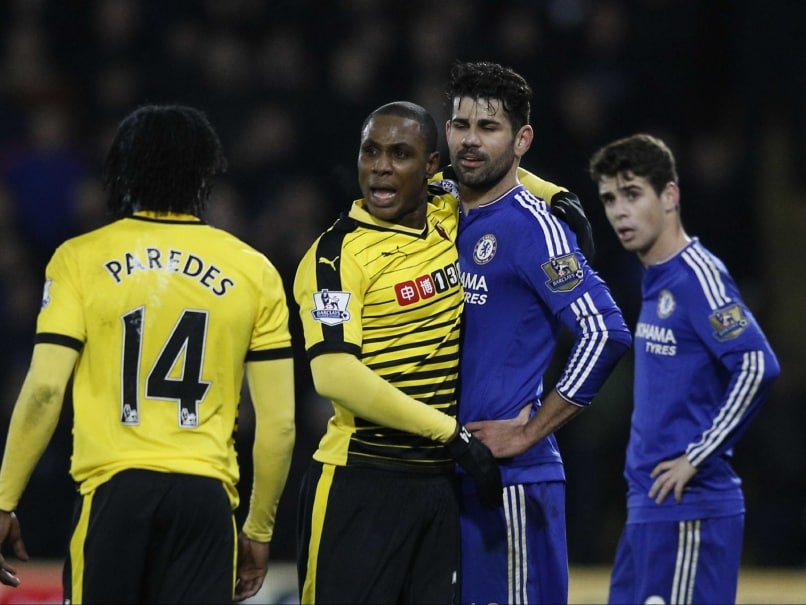 Costa had avoided being sent off by Dean against Arsenal despite later being given a retrospective three-match ban for clashing with Gunners defenders Laurent Koscielny and Gabriel. (Chelsea F.C. May Decide to Retain John Terry: Guus Hiddink)

The notoriously temperamental Costa, who reportedly punched a hole in the tunnel wall after scuffles with West Bromwich Albion players recently, was at it again at Vicarage Road. (Want to See if Alexandre Pato Still Has Desire: Guus Hiddink)

The Spain international could easily have been dismissed for his first-half shove on Watford's Sebastian Prodl, but Dean once again opted to give him a telling off instead.

Not content with that escape, Costa then infuriated Watford and finally earned a booking after pushing over Juan Carlos Parades.

Costa's latest temper tantrums overshadowed what may prove to have been the start of Chelsea captain John Terry's farewell tour.

Terry dropped a bombshell on Sunday when he said he would be leaving Chelsea after 18 years because the club's hierarchy had told him he will not be offered a new contract when his current deal expires at the end of the season.

Chelsea responded by insisting the 35-year-old former England defender's future was still to be resolved, but Terry seems convinced he is on the way out, even though he looked in good nick on his return to action.

Chelsea are now unbeaten in nine games in all competitions under interim manager Guus Hiddink since the Dutchman took charge following Jose Mourinho's sacking in December.

Terry's glittering Chelsea career has earned him the undying loyalty of the club's supporters and there were cheers when his name was read out before kick-off and banners hoisted aloft bearing his image.

Hiddink had declared that Terry was playing as well as ever and would remain an integral part of his plans whatever might happen in the close season.

And he needed Terry at his obdurate best on another tricky night for the fallen champions.

Nothing has summed up Chelsea's tetchy response to their predicament than the permanent expression of rage plastered over Costa's face this season.

He was in typically feisty mood as he pushed over Prodl in a needless off-the-ball incident and surprisingly escaped censure from Dean.

Watford as a unit are far too tenacious to be cowed by Costa's crude attempts at intimidation and they began to push Chelsea onto the back foot.

They went close to taking the lead twice in quick succession when Prodl's header from a Ben Watson corner was well saved by Thibaut Courtois, who repelled Etienne Capoue's stinging drive moments later.

Costa showed the more positive aspects of his game when he overpowered Craig Cathcart to reach Oscar's long pass and attempted a shot that was deflected wide.

But he finished the half in the spotlight again when he was booked after shoving over Paredes in response to an innocuous nudge seconds earlier.

Hiddink needed to get Costa and his team-mates refocused at half-time and they made an early incursion into the Watford area after the interval that ended with John Mikel Obi's deflected shot being tipped over by Heurelho Gomes.

The hosts remained dangerous, however, and Troy Deeney volleyed wide before Jose Holebas fired into the side-netting.

Oscar wasted a golden opportunity to give Chelsea the lead when he poked wide from Costa's cross and the Brazil midfielder was unable to get the better of Gomes with another, more accurate, effort that the goalkeeper palmed away.

Hiddink sent on Eden Hazard for the last 18 minutes and his arrival immediately perked up Chelsea's lethargic attack, the Belgian teeing up Branislav Ivanovic for a shot that Gomes saved well at his near post.

Costa almost had the last word, but his deflected header was superbly saved by Gomes.

Comments
Topics mentioned in this article
Chelsea Watford Diego Costa Heurelho Gomes John Terry English Premier League Football
Get the latest updates on Fifa Worldcup 2022 and check out  Fifa World Cup Schedule, Stats and Live Cricket Score. Like us on Facebook or follow us on Twitter for more sports updates. You can also download the NDTV Cricket app for Android or iOS.