Eden Hazard himself admitted after the game that solo effort against West Ham was "something special". 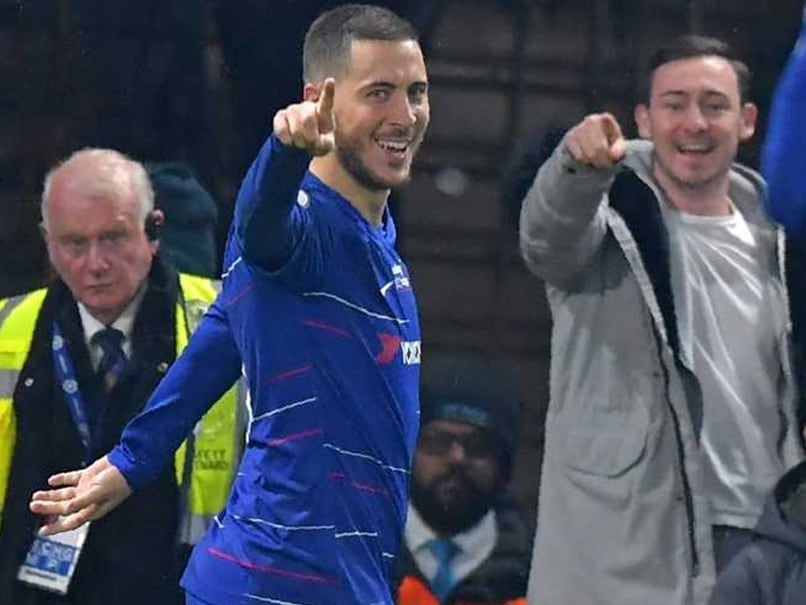 Eden Hazard opened the scoring in the 24th minute with one of the goals of the season.© AFP

Eden Hazard turned on the style as Chelsea beat West Ham United 2-0 at Stamford Bridge to move into third place in the Premier League standings. Eden Hazard was in top form, scoring a brace to take his tally of goals in the Premier League to 16. Eden Hazard has been directly involved in 28 goals this season, the most for any player in the Premier League. Hazard's opener came in the 24th minute and will surely go down as one of the contenders for the goal of the season. The Belgian maestro slalomed his way past multiple West Ham defenders before coolly slotting home with his weaker left foot.

Here is a clip of the goal that has gone viral on social media:

If you didn't watch last nights game or if you are like me and want to watch Eden Hazard's fantastic individual goal again here it is!

Martin Tyler in the commentary box for the Chelsea vs West Ham game said that not only was Eden Hazard's effort "one of the goals of the season" but also "one of great Premier League individual goals".

Good morning ..EDEN HAZARD IS THE BEST IN EPL

Eden Hazard is the best attacker in the Premier League.

Watching this @hazardeden10 goal against @WestHamUtd , I realized he dribbled through 6 players out of the 11 on field to score that sublime goal. He's just @premierleague

Can't get enough of watching that goal from @hazardeden10, on loop. #CHEWH @ChelseaFC

How are we going to explain to our grandchildren just how Eden Hazard managed to score from these positions without any assistance from his teammates? pic.twitter.com/Ekqi3bgeOS

After the match, Eden Hazard admitted his first goal was "something special" as after collecting the ball just inside the West Ham half, Hazard jinked past three defenders before coolly slotting home.

Both their London rivals and Manchester United -- five points back in sixth -- now have a game in hand on Sarri's men.

West Ham United Eden Hazard Chelsea vs West Ham United, Game week 33 English Premier League Football
Get the latest updates on IPL Auction 2023 and check out  IPL 2023 and Live Cricket Score. Like us on Facebook or follow us on Twitter for more sports updates. You can also download the NDTV Cricket app for Android or iOS.