Chelsea shrugged off a shock 3-2 defeat at West Ham in midweek with a routine win over Watford at Stamford Bridge. 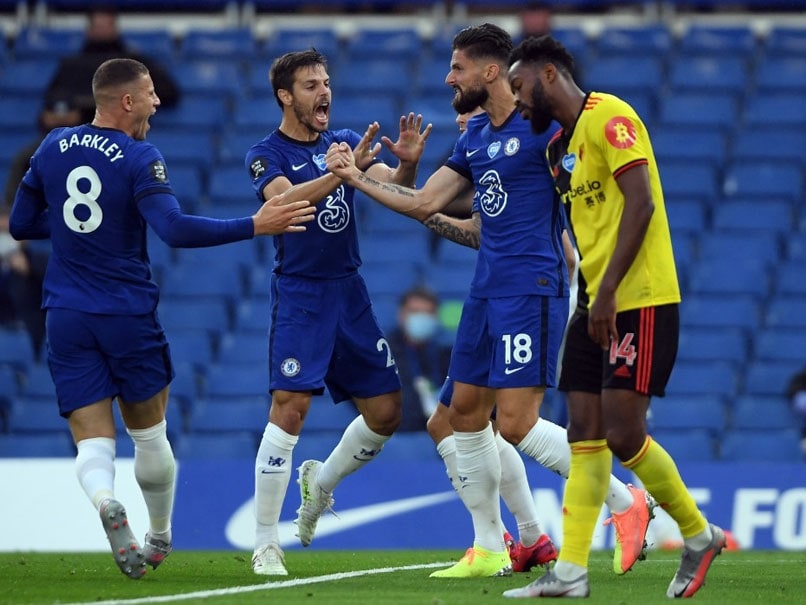 Chelsea beat Watford 3-0 to move back into fourth place in the Premier League table.© AFP

Frank Lampard told Chelsea to embrace the pressure of the race for a place in the Champions League next season after his side edged two points back in front of Manchester United and into the top four with a comfortable 3-0 win over Watford on Saturday. After a bitterly disappointing 3-2 defeat at struggling West Ham in midweek, in-form United's 5-2 thrashing of Bournemouth earlier in the day saw Chelsea slip outside the top four before kick-off. But there was never any doubt the Blues would move back into fourth as goals from Olivier Giroud, Willian and Ross Barkley capped a dominant display and left the Hornets still precariously placed just one point outside the relegation zone.

"We had the chance to go third on Wednesday. Today there was pressure on us just to get back into fourth. That's the pressure we have to get used to," said Lampard. "It was a comfortable evening for us."

The pressure is certainly on Lampard to deliver Champions League football next season after the club have already invested nearly 100 million pounds ($125 million) in signing Timo Werner and Hakim Ziyech.

Lampard reacted to conceding three times to West Ham by making four changes with Marcos Alonso and Antonio Rudiger paying the price for their part in the Hammers' late winner.

Giroud was one of those recalled to the starting line-up and the 33-year-old showed why Lampard extended his contract for another year during the coronavirus shutdown.

The French international was denied by the quick reflexes of Ben Foster with his first big chance, but was not to be stopped when he span onto Barkley's pass before finding the bottom corner on 28 minutes.

Watford manager Nigel Pearson recalled Nathaniel Chalobah to the starting line-up and Andre Gray to the matchday squad after both were dropped for a 3-1 home defeat by Southampton last weekend after flouting UK government guidelines by attending a party for Gray's 29th birthday.

However, there was no improvement in the performance as Watford have taken just one point from four games since the restart.

"Of course we are concerned with the situation we are in, we are not naive, but the most important thing is to recognise what we are and make sure our performances reflect that collective spirit," said Pearson. "What we can't do is reproduce games like last week."

The visitors gave themselves a mountain to climb when Etienne Capoue unnecessarily barged into Christian Pulisic to concede a penalty.

Willian is into the final month of his contract at Stamford Bridge after seven years with the club. But if the Brazilian is to depart with Arsenal and Tottenham interested in keeping him in London, his Chelsea career is going out on a high as he netted his fourth goal in as many Premier League games since the resumption.

Watford appeared content just to keep the score down after half-time with goal difference a consideration in the battle to beat the drop.

Pearson's men host bottom-of-the-table Norwich on Tuesday in a huge match if they are to build up a cushion over Bournemouth and Aston Villa, with Arsenal and Manchester City to come in the final week of the season.

Chelsea had to settle for just one more goal in the second half as Barkley fired home Cesar Azpilicueta's cut-back in stoppage time.

Olivier Giroud Willian Ross Barkley English Premier League Football
Get the latest updates on IPL Auction 2023 and check out  IPL 2023 and Live Cricket Score. Like us on Facebook or follow us on Twitter for more sports updates. You can also download the NDTV Cricket app for Android or iOS.