Marcus Rashford, Anthony Martial, Bruno Fernandes and Mason Greenwood, who netted twice, were all on the scoresheet to lift Manchester United one point above fifth-placed Chelsea. 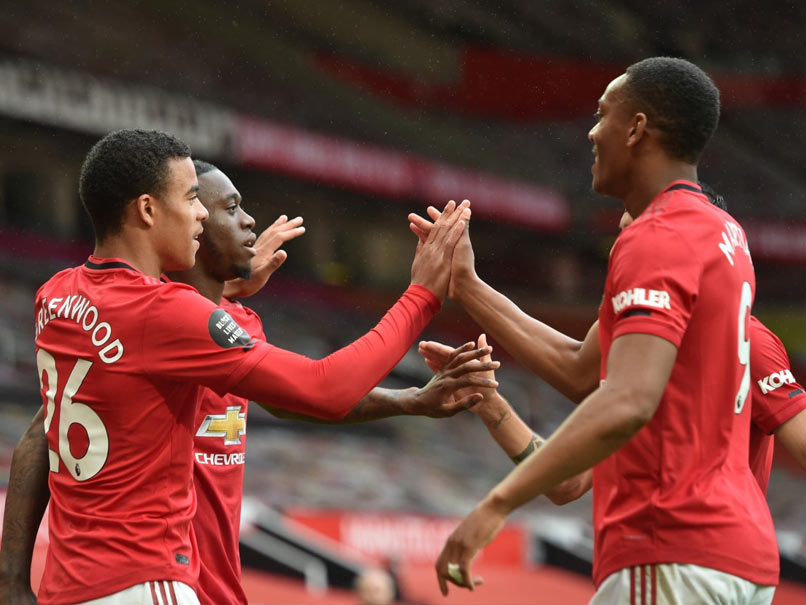 Manchester United have won their last four games in all competitions, scoring 13 goals in the process.© AFP

Manchester United powered into fourth place in the Premier League with a 5-2 rout of struggling Bournemouth, while Leicester got back on track in a 3-0 win against Crystal Palace on Saturday. Ole Gunnar Solskjaer's side boosted their bid to qualify for next season's Champions League thanks to a swaggering display at Old Trafford.

Marcus Rashford, Anthony Martial, Bruno Fernandes and Mason Greenwood, who netted twice, were all on the scoresheet to lift United one point above fifth-placed Chelsea.

United have won their last four games in all competitions, scoring 13 goals in the process.

They were rocked in the 16th minute when Junior Stanislas gave Bournemouth a shock lead.

Stanislas' initial effort was blocked but he cleverly nutmegged Harry Maguire on the touchline and shot past David De Gea at his near post.

United hit back 13 minutes later when Greenwood finished off a flowing break for his 14th goal this term.

Fernandes picked out the 18-year-old on the edge of the area and his strike raced past Bournemouth keeper Aaron Ramsdale.

United doubled their lead in the 35th minute after Adam Smith was penalised for handball in the area.

Rashford converted the spot-kick for his 20th club goal of the season.

Cutting in from the left, the French striker beat Ramsdale with a superb curling effort from the edge of the area.

Martial and Rashford both now have 20 goals in all competitions this season -- the first time a United pair have managed that since Dimitar Berbatov and Javier Hernandez in the 2010-11 campaign.

Eric Bailly gave Bournemouth brief hope when he conceded a penalty just four minutes after coming on as a half-time substitute.

The United defender's handball was ruled by VAR to be just inside the area and Josh King scored the spot-kick.

Solskjaer's men were unfazed and Greenwood restored their two-goal cushion five minutes later as he shot into the top corner after eluded Diego Rico.

Fernandes capped another influential display when the Portugal playmaker bent a powerful free-kick beyond Ramsdale in the 59th minute.

At the King Power Stadium, Leicester went ahead five minutes into the second half thanks to a mistake from Palace keeper Vicente Guaita.

Marc Albrighton and Ayoze Perez combined to pick out Youri Tielemans and when the Belgian swung a cross into the six-yard box, Kelechi Iheanacho poked home after Guaita failed to collect.

Jamie Vardy bagged his 100th Premier League goal in the 77th minute, the striker becoming the 29th player to reach the milestone as he tapped in Harvey Barnes' pass.

Vardy struck again in the 90th minute as Leicester won for the first time in five games.

Norwich manager Daniel Farke conceded his side are heading for relegation after Leandro Trossard fired Brighton to a 1-0 win at Carrow Road.

Trossard netted in the first half to move Brighton nine points clear of the relegation zone before the bulk of the weekend's matches.

Brighton's second win in four games since the restart puts them in position beat the drop, but the picture is much bleaker for Norwich.

With five matches left, Norwich are seven points from safety after losing all five games following the coronavirus hiatus.

Farke knows Norwich's chances of avoiding an immediate return to the Championship are almost over, especially with games against Chelsea and Manchester City still to come.

"It was more or less our last chance to get back in the mix and we are disappointed," he said.

"After a few losses, we don't have the right to make any fighting messages or to make any unrealistic claims."

Chelsea
Get the latest updates on India vs South Africa and check out  Schedule, Results and Live Score. Like us on Facebook or follow us on Twitter for more sports updates. You can also download the NDTV Cricket app for Android or iOS.