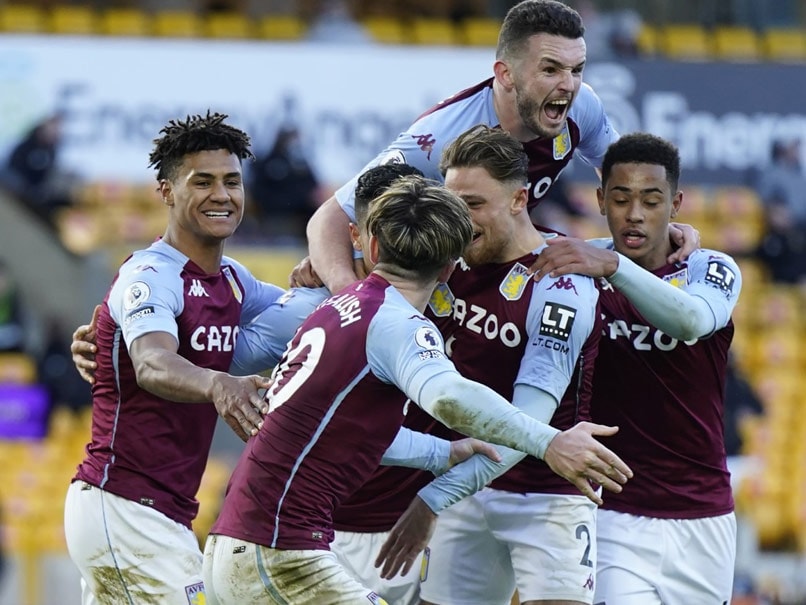 Aston Villa have won four of their five away league matches this season.© AFP

Anwar El Ghazi's last-gasp penalty fired 10-man Aston Villa to a dramatic 1-0 win against Wolves, while under-fire Manchester United coach Ole Gunnar Solskjaer prepared for a crucial derby against Manchester City on Saturday. In the first of the day's Premier League games, Dutch winger El Ghazi struck from the spot in stoppage-time to lift Villa into eighth place. Villa had Douglas Luiz sent off in the final minutes for two bookings, after the Brazilian midfielder caught Daniel Podence with an elbow. But Nelson Semedo's foul on John McGinn triggered El Ghazi's penalty before Wolves midfielder Joao Moutinho was dismissed for a second yellow card, just moments from full-time in a fractious local derby.

After two successive defeats, Villa will hope they are back on track with just their second win in six games.

Villa have won four of their five away league matches this season, while mid-table Wolves have only one win in their last five games.

With Raul Jimenez out after surgery on the fractured skull he suffered against Arsenal, Wolves handed a first Premier League start to 18-year-old striker Fabio Silva -- a club record ($46 million) signing from Porto in the close-season.

It was two weeks since Villa last played after the Newcastle match was postponed due to their opponents' coronavirus outbreak, and they took a while to get going as a result.

Villa appealed for a penalty when the ball glanced off Romain Saiss' shoulder as he stooped to head clear, but VAR ignored their protests.

Wolves finished the first half strongly, with Daniel Podence forcing Emiliano Martinez to save his low drive.

Silva was inches away from a first Premier League goal when he took Podence's pass and rifled his first-time shot past Martinez, only to see the ball cannon back off the post.

Luiz's stray elbow earned him a red card from Mike Dean in the 85th minute, but El Ghazi won it from the penalty spot after McGinn's burst was halted by Semedo.

Later, Solskjaer's United will look to bounce back from their Champions League exit in midweek.

Following a run of four straight league wins, the Red Devils can claim to be in the hunt for a first league title since Alex Ferguson's retirement in 2013 sent them into decline.

But the helter-skelter nature of some of those victories, allied to the shoddy defending that led to a 3-2 defeat to RB Leipzig in midweek, means the pressure is once again on Solskjaer.

A fourth defeat in six Premier League games at Old Trafford this season could see United finish the weekend eight points off the leaders, albeit with a game in hand.

City are a point behind United, in seventh, but Pep Guardiola's men appear to be coming into form after recording back-to-back league wins for the first time this season.

In stark contrast to United's Champions League woes, City's serene progress into the last-16, with two games to spare, allowed Guardiola to leave Kevin De Bruyne and Gabriel Jesus in reserve for the derby.

Manchester City Football
Get the latest updates on SA vs IND 2021-22, check out the Schedule and Live Score . Like us on Facebook or follow us on Twitter for more sports updates. You can also download the NDTV Cricket app for Android or iOS.