Cyclist Lance Armstrong's rise was meteoric and symbolic. With rise comes fall and Armstrong's heroics came all undone towards the later part of last year. He now continues to be a legacy, albeit for wrong reasons.

After his confession to Oprah Winfrey - interview aired on January 17 - on doping in all of his Tour de France wins, a now clear way to describe him would be a man who chose to be honest, finally. This despite over a decade of denials against charges made against him.

Cyclist Lance Armstrong's rise was meteoric and symbolic. It was a celebration of human determination over physical limitations. After all, despite being diagnosed with level three testicular cancer, Armstrong battledÂ  his wayÂ  - quite literally - to numerous laurels including Olympic medals and a record number of Tour de France titles.

With rise comes fall and Armstrong's heroics came all undone towards the later part of last year. Charges of using performance enhancing drugs was leveled against him by the United States Anti-Doping Agency (USADA) and he was stripped of all his achievements since August 1998. It was not the first time such charges were made against him but it was definitely the first time that affirmative action was taken against Lance Edward Armstrong.

Years 1994 and 1995 saw more wins for Armstrong but in 1996, he was diagnosed with testicular cancer which spread to several other parts of his body as well. After surgery and chemotherapy sessions, the cyclist staged a miraculous comeback. In 1999, he won his maiden Tour de France Title. The win was a remarkable achievement but for Armstrong, it was the start of even bigger things to come - Tour de France wins in 2000, 2001, 2002 and 2003.

Several other accolades followed in the ensuing years and things looked bright on the personal front as well when Armstrong announced he is in a relationship with singer Sheryl Crow.

Allegations of using performance enhancing substances were made against Armstrong as far back as in 1999. A French magazine had claimed that erythropoietin (EPO) was found in his frozen urine samples. A book titles L.A. Confidential was also published which made similar charges.

In 2006 though, Armstrong was cleared of all charges though the good news was followed by heart-break as he split with Crow despite announcing their engagement a year earlier.

He raced for Team Astana from 2008 - around the time he announced his relationship with Anna Hansen - and then, began his own team - Team RadioShack. While he retired completely in February 2011, speculation on whether he used performance enhancing drugs prevailed.

USADA, in June 2012, charged Armstrong for using banned substances like steroids, EPO and engaging in blood doping. Armstrong continued to deny though he said he won't contest the charges made against him.

Finally, after a decade of saying he never did, in an interview to Oprah Winfrey aired on January 17, Armstrong confessed to having used. "I went and looked up the definition of cheat. And the definition is to gain an advantage on a rival or foe. I didn't view it that way. I viewed it as a level playing field," he said.

The man, the mark and the memories of what was

Lance Armstrong may have earlier been known as the man who defied all logic. Lance Armstrong may now be remembered as the cyclist who doped. What the world though will forget is the inspiration he became for people from all walks of life - even if it was a deceptive image. They won't consider him a true champion but while he was, Lance Armstrong's image served to help scores of people in fighting past odds thrown up by life.

The Livestrong charitable foundation was begun by Armstrong to support cancer patients. Scores of patients benefited from it and while people may be striking out a letter on their LIVESTRONG wrist bands to make it read LIESTRONG, according to a report on CNN, what cannot be taken away from his foundation is the good-work done. 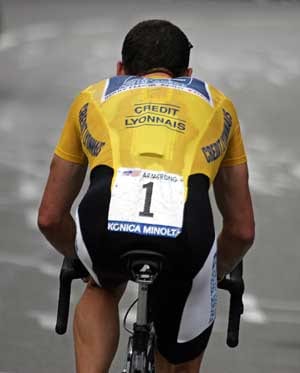 "This is my body and I can do whatever I want to it. I can push it, and study it, tweak it, listen to it. Everybody wants to know what I'm on. What am I on? I'm on my bike, busting my ass six hours a day. What are you on?"

"It's our word against his word. I like our word. We like our credibility. Floyd lost his credibility a long time ago."

-- - Response to disgraced cyclist Floyd Landis's accusations of systematic doping in the US Postal cycling team.

"There comes a point in every man's life when he has to say, 'Enough is enough.' For me, that time is now. I have been dealing with claims that I cheated and had an unfair advantage in winning my seven Tours since 1999."

-- Armstrong announces he won't fight USADA's charges and pursue a hearing to prove his innocence.

"I could not have won the race seven times without the drugs."

"My cocktail was EPO, transfusions and testosterone."

"I am sorry for taking performance-enhancing drugs during my career and that it was a mistake."