Armstrong says during one part of the interview that he looked up at the definition of a cheat. He didn't agree with what he found. 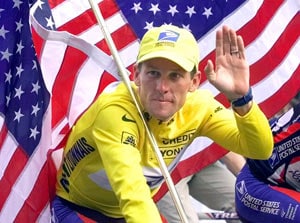 Lance Armstrong confessed to using performance-enhancing drugs to win the Tour de France during an interview with Oprah Winfrey, reversing more than a decade of denial. Here are some of his quotes:

"I could not have won the race seven times without the drugs."

"I made my decisions. They're my mistake. And I'm sitting here today to acknowledge that and to say I'm sorry for that."

"My cocktail was EPO, transfusions and testosterone."

"Not possible to win seven Tours without doping."

I went and looked up the definition of cheat, and the definition is to gain an advantage on a rival or foe. I didn't view it that way. I viewed it as a level playing field.

He said "my fate was sealed" when longtime friend, training partner and trusted lieutenant George Hincapie, who was along for the ride on all seven of Armstrong's Tour de France wins, was forced to give him up to anti-doping authorities.

"I am sorry for taking performance-enhancing drugs during my career and that it was a mistake."

"I view this situation as one big lie that I repeated a lot of times."

"I was a flawed character."

"All the fault and all the blame here falls on me."

"Doping was part of the job."

"I never forced teammates to dope."