Adam Yates took over the Tour de France yellow jersey after Julian Alaphilippe was given a 20-second penalty for taking provision during the last 20 km. 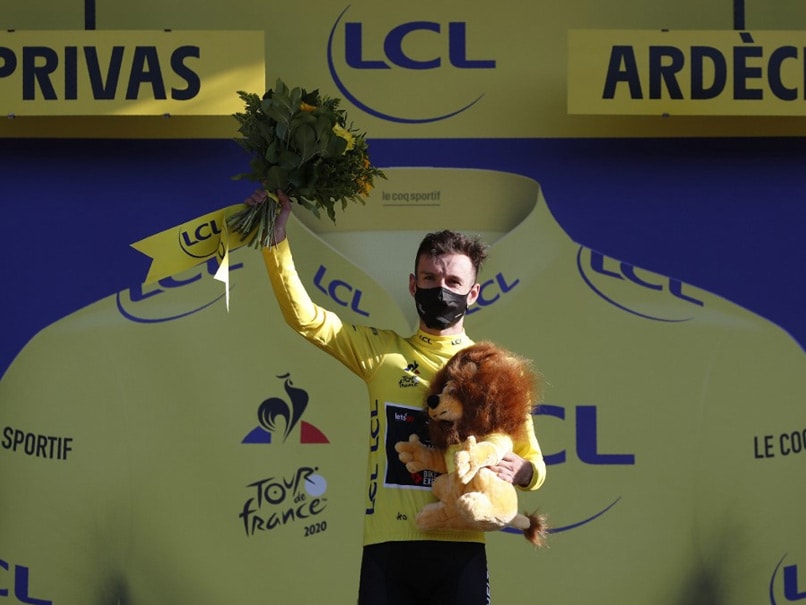 Adam Yates said he would give it his all to defend the overall lead in the Tour de France.© AFP

Britain's Adam Yates reluctantly took the Tour de France's yellow jersey on Wednesday as overnight leader Julian Alaphilippe was penalised for taking on provisions in the final 20km. Mitchelton-Scott's Yates takes advantage of Alaphilippe's 20-second sanction for receiving a water bottle at the 17km mark as Belgium's Wout Van Aert won the fifth stage. Taking on supplies from team cars is not allowed in the final 20km for safety reasons, but riders can drink or eat what they already have.

"Nobody wants to take the jersey like this. I was on the bus and we were about to leave for the hotel when I got a call," Yates said.

"I'd already had my shower and everything I asked Julian and he told me he had a time fine, but tomorrow I'll give it everything to defend the jersey and we'll see day by day."

"It'll be a big fight tomorrow and Julian will want to show he's still here," he added.

Deceuninck-Quick Step's Alaphilippe, who wore the jersey for 14 days during last year's Tour, took the news on the chin.

"What can you do," said the former French soldier. "They decided to impose a 20 second penalty and it's their choice.

"There will be other days and other opportunities," he said.

In the stage itself powerful Dutch outfit Jumbo-Visma made it two stage wins in two days as Van Aert edged a tight bunch sprint on a narrow winding finish.

In another change of jerseys Ireland's Sam Bennett, who is on the same Deceuninck team as Alaphilippe, clinched the green sprint points shirt from seven time winner Peter Sagan by finishing third.

Van Aert's Jumbo-Visma arrived at the Tour as the in-form team with the most powerful looking line-up in the Grand Boucle, and are the chief challengers to the dominance of Team Ineos who have won seven of the last eight Tours.

Jumbo leader Primoz Roglic won Tuesday's stage testing the other overall contenders with his late kick and claiming the stage win atop the climb to an Alpine ski station.

On Wednesday, it was a hectic and windy finale as the race wound into the remote Ardeche region where some of the pure sprinters were actually dropped as the pace hit 60km an hour in the closing 10km.

Ineos, who have signed Yates for next season, were heading up the peloton as it raced past fields of wilting sunflowers but Jumbo sprung to life as the race entered Privas.

"They are here and they know how to win. They are powerful team," Van Aert said.

"But we are just focussing on ourselves."

Van Aert won a windy stage on the 2019 Tour when many of the purist sprinters had been dropped, and was part of the team time-trial victory for his outfit.

"It was a sweet win," said Van Aert, who won both Milan San Remo and the Strade Bianchi classics in Italy ahead of the Tour.

"It was a hectic run in but I knew I was in with a chance once we were in the final kilometre," said the 25-year-old.

"Our leader showed his strong legs and today it was my turn.

Ineos leader Egan Bernal said earlier on Wednesday at the Alpine departure town of Gap he was unconcerned by Jumbo's form.

"We are concentrating on arriving in the third week good and fresh for the finale," said the 23-year-old defending champion.