I lost three years of my life on that climb, I gave it everything. But I just couldn't keep up, said Egan Bernal. 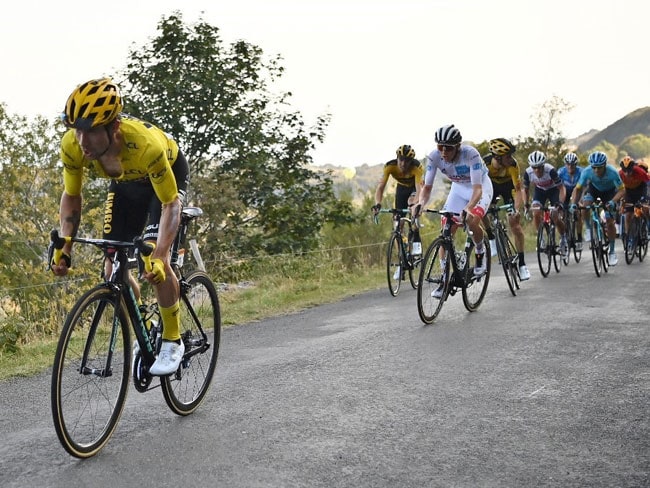 Primoz Roglic denied any suggestions he was doping.© AFP

Egan Bernal's defence of the Tour de France was reduced to cinders Sunday as the Colombian suffered a meltdown on the first major mountain of the race, while the overall leader Primoz Roglic denied any suggestions he was doping. With three massive mountains, the stage itself was won by 21-year-old rookie Tadej Pogacar, but the extent of the 2019 champion's astonishing collapse on the final climb is the story of the Tour so far. "I lost three years of my life on that climb, I gave it everything," said Bernal. "But I just couldn't keep up."

Jumbo-Visma's Roglic retained the overall lead after the concluding 17km ascent of the Grand Colombier, which he ascended with four teammates.

Ineos captain Bernal slipped to eight minutes and 25 seconds behind in the yellow jersey standings in 13th place.

Ineos, formerly known as Sky, have won seven of the last eight Tours led by such luminaries as Bradley Wiggins, Chris Froome and Geraint Thomas, and this jaw-dropping defeat marks something of a turning point for the British team.

Dutch team Jumbo led the peloton up the Grand Colombier's demanding climb in their yellow and black outfits with a relentless high tempo, but Roglic brushed off any suspicions of doping from the media.

"At 6 a.m. this morning I had a complete doping control, and just had another one right now," Roglic said, looking flabbergasted when asked.

"There is nothing to hide from my side. You can definitely trust me," Roglic added in his typical deadpan delivery.

Third on the day behind Australian Richie Porte, Roglic attacked first, but his 21-year old compatriot had the edge over the final 50m.

"Unfortunately I was a bit short on the last climb, but it was a great day for us," said the Jumbo leader, a former ski jumper who came to cycling late.

Roglic leads Pogacar by 40 seconds with six stages remaining, with Colombia's Rigoberto Uran of Education First in third at 1min 34sec, while Miguel Angel Lopez and Adam Yates round out the top five.

Pogacar 'in the real world'

Pogacar said he had bided his time and just kept up.

"I need to be conservative, the perfect scenario would have been to take the yellow jersey, but we live in the real world.

"I don't know what happened to Bernal, but Jumbo set a terrible pace and some riders paid for it," the UAE leader explained.

Another casualty was Nairo Quintana, who also dropped out of the running for the overall lead.

"It was hot and all three climbs were really hard," Pogacar explained.

Asked how he felt about the Tour's decisive penultimate stage 20 next Saturday, an individual time trial run over 30km of rolling terrain before a 6km climb up the Planche des Belles Filles, Pogacar said he could hardly wait.

"I did the recon of the Planche but that was just a trial run. It'll be different after three weeks' racing. I'm really looking forward to it though."

The race left Lyon with 157 riders, some of whom had their dreaded nasal swabs early in the day as the final Covid-19 testing round of this Tour started. It will be concluded on the rest day on Monday.

The first ascent of the Montee de la Selle de Fromentel was the steepest and Ineos rider Luke Rowe, no wilting violet, shook his head in disbelief and laughed during one 18 percent section.

Often described as the Giant of the Jura, the Grand Colombier was alternatively dubbed "an excellent mountain" because of the breadth of the road offering so much room for manoeuvre.

But it proved the ruin of Ineos on Sunday as Bernal slipped off the back of the pack with 15km still to climb. Few had predicted however the extent of his colossal seven-minute loss over the remainder of the course.