Right from the start and more than two dozen times during the first of a two-part interview on Thursday night with Oprah Winfrey, the disgraced former cycling champion acknowledged what he had lied about repeatedly for years 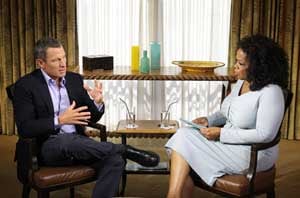 He did it. He finally admitted it. Lance Armstrong doped.

He was light on the details and didn't name names. He mused that he might not have been caught if not for his comeback in 2009. And he was certain his "fate was sealed" when longtime friend, training partner and trusted lieutenant George Hincapie, who was along for the ride on all seven of Armstrong's Tour de France wins from 1999-2005, was forced to give him up to anti-doping authorities.

But right from the start and more than two dozen times during the first of a two-part interview on Thursday night with Oprah Winfrey, the disgraced former cycling champion acknowledged what he had lied about repeatedly for years, and what had been one of the worst-kept secrets for the better part of a week: He was the ringleader of an elaborate doping scheme on a U.S. Postal Service team that swept him to the top of the podium at the Tour de France time after time.

"At the time it did not feel wrong?" Winfrey asked.

"Did you feel bad about it?" she pressed him.

"Did you feel in any way that you were cheating?"

"I went and looked up the definition of cheat," he added a moment later. "And the definition is to gain an advantage on a rival or foe. I didn't view it that way. I viewed it as a level playing field."

Wearing a blue blazer and open-neck shirt, Armstrong was direct and matter-of-fact, neither pained nor contrite. He looked straight ahead. There were no tears and very few laughs. (Related read: Who was and who is Lance Armstrong)

Whether his televised confession will help or hurt Armstrong's bruised reputation and his already-tenuous defense in at least two pending lawsuits, and possibly a third, remains to be seen. Either way, a story that seemed too good to be true - cancer survivor returns to win one of sport's most grueling events seven times in a row - was revealed to be just that.

Winfrey got right to the point, asking for yes-or-no answers to five questions.

Did he do blood doping and use transfusions? "Yes."

Did he use testosterone, cortisone and human growth hormone? "Yes."

Did he take banned substances or blood dope in all his Tour wins? "Yes."

Along the way, Armstrong cast aside teammates who questioned his tactics, yet swore he raced clean and tried to silence anyone who said otherwise. Ruthless and rich enough to settle any score, no place seemed beyond his reach - courtrooms, the court of public opinion, even along the roads of his sport's most prestigious race.

That relentless pursuit was one of the things that Armstrong said he regretted most.

"It's a major flaw, and it's a guy who expected to get whatever he wanted and to control every outcome. And it's inexcusable. And when I say there are people who will hear this and never forgive me, I understand that. I do."

Anti-doping officials have said nothing short of a confession under oath - "not talking to a talk-show host," is how World Anti-Doping Agency director general David Howman put it - could prompt a reconsideration of Armstrong's lifetime ban from sanctioned events.

He's also had discussions with officials at the U.S. Anti-Doping Agency, whose 1,000-page report in October included testimony from nearly a dozen former teammates and led to stripping Armstrong of his Tour titles. Shortly after, he lost nearly all his endorsements and was forced to walk away from the Livestrong cancer charity he founded in 1997.

Armstrong could provide information that might get his ban being reduced to eight years, according to a person with knowledge of the situation. By then, Armstrong would be 49. He returned to triathlons, where he began his professional career as a teenager, after retiring from cycling in 2011, and has told people he's desperate to get back.

There were very few details about Armstrong's performance-enhancing regimen that would surprise anti-doping officials.

What he called "my cocktail" contained the steroid testosterone and the blood-booster erythropoetein, or EPO, "but not a lot," Armstrong said. That was on top of blood-doping, which involved removing his own blood and weeks later re-injecting it into his system.

All of it was designed to build strength and endurance, but it became so routine that Armstrong described it as "like saying we have to have air in our tires or water in our bottles."