Dallas insurance company SCA Promotions confirmed on Wednesday that it has sent Lance Armstrong a letter demanding the return of $12 million in bonuses and warned that it might take legal action. 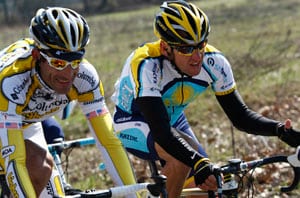 Dallas insurance company SCA Promotions confirmed on Wednesday that it has sent Lance Armstrong a letter demanding the return of $12 million in bonuses and warned that it might take legal action.

SCA attorney Jeff Dorough said the letter not only seeks back the bonus money but states that it might go to court for legal sanctions and penalties against the disgraced US cyclist, who was stripped of seven Tour de France titles for doping.

The potential legal action could come in connection with false testimony given by Armstrong during an arbitration hearing in 2005-2006.

Dorough confirmed that SCA was seeking $7.5 million paid out to Armstrong after a 2006 arbitration proceeding, which included a $5 million bonus as well as legal fees and interest.

"Mr. Armstrong is no longer the official winner of any Tour de France races and as a result it is inappropriate and improper for him to retain any bonus payments made by SCA," Dorough said.

The International Cycling Union (UCI) backed a US Anti-Doping Agency (USADA) decision to effectively erase Armstrong's cycling record, including the seven Tour de France titles he won from 1999 to 2005, after a lengthy investigation.

USADA released a detailed account of the evidence it collected when it presented UCI with a 200-page report that put Armstrong at the heart of the biggest doping programme in the history of sport.

During Armstrong's era of dominance, US Postal Service team parent company Tailwind Sports took out a policy with SCA, paying a premium to cover bonuses paid to Armstrong for his Tour de France victories.

When SCA withheld a $5 million bonus due after Armstrong's sixth Tour de France win in 2004 because of doping allegations circulating in Europe, Armstrong took them to court.

He won the case because the original contract between SCA and Tailwind Sports had no stipulations about doping.

Armstrong meanwhile posted his first Twitter message since stepping down as chairman of the Livestrong Foundation cancer charity he created in 1997, saying earlier this week that he was "Alive and well in Hawaii."