Geraint Thomas' win will give Team Sky their sixth yellow jersey from the last seven editions of the race. 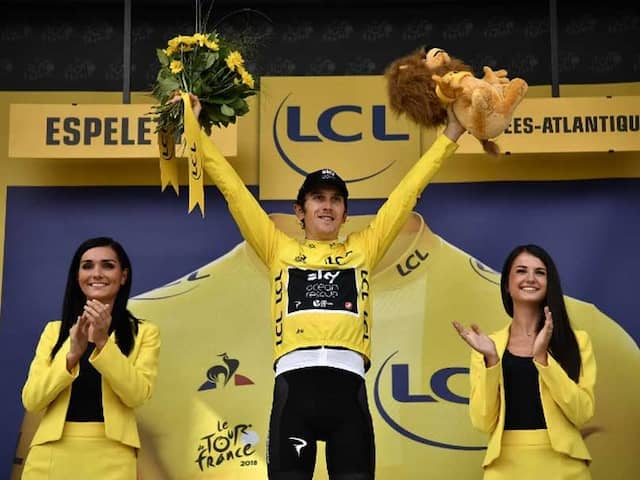 Geraint Thomas celebrates on the podium after the 20th stage of Tour de France.© AFP

Britain's Geraint Thomas virtually secured his maiden Tour de France triumph after finishing third in the penultimate stage time trial in the Basque country on Saturday. "I don't know what to say. It's just overwhelming," said Thomas, who finished 14sec behind stage winner Tom Dumoulin of Sunweb on the last real test of the race before Sunday's final stage to Paris. "I didn't think about winning the Tour de France for the whole race and suddenly... I've won the Tour, man! I can't speak. It's just incredible. It was stressful. I believed I could beat the guys here," he added.

"It was the biggest stage of all over three weeks. It's wonderful!"

Thomas, of Team Sky, held a 2min 05sec overnight lead on Dutch rival Dumoulin (Sunweb) ahead of the 31km race against the clock from Saint-Pee-Sur-Nivelle to Espelette.

Dumoulin is the world time trial champion, and he stayed true to form by powering over the technical course in a time of 40min 50sec to leave Thomas 14sec in arrears.

But it was only enough to secure his virtual runner-up place in the race, Dumoulin's second in a Grand Tour this year after he finished runner-up to Chris Froome at the Giro d'Italia in May, but his first on the Tour.

He initially thought he had lost by a second, before being told the contrary.

"I first heard that I was second by one second but it's the other way round and it's crazy," said Dumoulin, who suffered a mishap when he lost his aerodynamic skinsuit.

"I was so nervous this morning. We found out that we lost the skinsuit. Luckily our clothing sponsor is from the Basque country on the Spanish side and they made a new one this morning so I could wear it for racing.

"Otherwise I wouldn't have been able to ride in the rainbow colours (for the world champion).

"It's hard to believe that I've won this time trial. But it's fantastic to finish the Tour this way and make the final podium for the first time."

Froome, the defending and four-time Tour de France champion, produced the second best performance of the day, finishing just one second behind Dumoulin to move back up to third place overall.

Froome had been pushed down to fourth, and off the podium, when Primoz Roglic's attack and consequent stage win in the final day in the mountains Friday left the Kenyan-born Briton struggling.

But Slovenian Roglic, of Lotto-Jumbo, failed to follow up his feat on the time trial. He finished seventh at 1:12 behind Dumoulin.

"After yesterday (Friday) I thought it wouldn't be possible. To be on the podium alongside Geraint is a dream."

Thomas, who has helped Froome win several of his six Grand Tour titles, celebrated at the end of the stage by jumping into the arms of his wife.

"The last time I cried is when I got married," said Thomas.

Barring catastrophe on Sunday, when the peloton rides from Houilles to Paris in festive spirit before the sprinters take over for a battle on the Champs Elysees, Thomas will win Team Sky's sixth yellow jersey from the last seven editions of the race.