To start what was deemed a new and better doping strategy, Lance Armstrong and two of his teammates on the United States Postal Service cycling squad flew on a private jet to Valencia, Spain, in June 2000, to have blood extracted. In a hotel room there, two doctors and the team's manager stood by to see their plan unfold, watching the blood of their best riders drip into plastic bags. 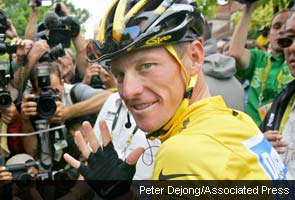 To start what was deemed a new and better doping strategy, Lance Armstrong and two of his teammates on the United States Postal Service cycling squad flew on a private jet to Valencia, Spain, in June 2000, to have blood extracted. In a hotel room there, two doctors and the team's manager stood by to see their plan unfold, watching the blood of their best riders drip into plastic bags.

The next month, during the Tour de France, the cyclists lay on beds with those blood bags affixed to the wall. They shivered as the cool blood re-entered their bodies. The reinfused blood would boost the riders' oxygen-carrying capacity and improve stamina during the second of Armstrong's seven Tour wins. (Read:Evidence hits Lance Armstrong guilt without positive test)

The following day, Armstrong extended his overall lead with a swift ascent of the unforgiving and seemingly unending route up Mont Ventoux.

At a race in Spain that same year, Armstrong told a teammate that he had taken testosterone, a banned substance he called "oil." The teammate warned Armstrong that drug-testing officials were at the team hotel, prompting Armstrong to drop out of the race to avoid being caught.

In 2002, Armstrong summoned a teammate to his apartment in Girona, Spain. He told his teammate that if he wanted to continue riding for the team he would have to follow the doping program outlined by Armstrong's doctor, a known proponent of doping.

The rider said that the conversation confirmed that "Lance called the shots on the team," and that "what Lance said went." (Read: 26 testify against Lance Armstrong in doping case)

Those accounts were revealed Wednesday in hundreds of pages of eyewitness testimony from teammates, e-mail correspondence, financial records and laboratory analyses released by the United States Anti-Doping AgencyÂ  - the quasi-governmental group charged with policing the use of performance-enhancing drugs in Olympic sports.

During all that time, Armstrong was a hero on two wheels, a cancer survivor who was making his mark as perhaps the most dominant cyclist in history. But the evidence put forth by the antidoping agency drew a picture of Armstrong as an infamous cheat, a defiant liar and a bully who pushed others to cheat with him so he could succeed, or be vanquished. (Read: Lance Armstrong ran a doping ring, say USADA officials)

"The U.S.P.S. Team doping conspiracy was professionally designed to groom and pressure athletes to use dangerous drugs, to evade detection, to ensure its secrecy and ultimately gain an unfair competitive advantage through superior doping practices," the agency said. "A program organized by individuals who thought they were above the rules and who still play a major and active role in sport today."

Armstrong, who retired from cycling last year, has repeatedly denied doping. On Wednesday, his spokesman said Armstrong had no comment.

When Armstrong decided in August not to contest the agency's charges that he doped, administered doping products and encouraged doping on his Tour-winning teams, he agreed to forgo an arbitration hearing at which the evidence against him would have been aired, possibly publicly. But that evidence, which the antidoping agency called overwhelming and proof of the most sophisticated sports doping program in history, came out anyway.

The teammates who submitted sworn affidavits - admitting their own doping and detailing Armstrong's involvement in it - included some of the best cyclists of Armstrong's generation: Levi Leipheimer, Tyler Hamilton and George Hincapie, one of the most respected American riders in recent history. Other teammates who came forward with information were Frankie Andreu, Michael Barry, Tom Danielson, Floyd Landis, Stephen Swart, Christian Vande Velde, Jonathan Vaughters and David Zabriskie.

Their accounts painted an eerie and complete picture of the doping on Armstrong's teams, squads that dominated the sport of cycling for nearly a decade.

"His goal led him to depend on EPO, testosterone and blood transfusions but also, more ruthlessly, to expect and to require that his teammates would likewise use drugs to support his goals if not their own," the agency said in its 202-page report.

Drug use was casual among the top riders, and some shared EPO - the banned blood booster erythropoietin - as if borrowing cups of sugar from a neighbor. In 2005, Hincapie on two occasions asked Armstrong, "Any EPO I could borrow?" and Armstrong obliged without question. In 2003, Armstrong showed up at Hincapie's apartment in Spain and had his blood drawn for a future banned blood transfusion, Hincapie said, adding that he was aware that Armstrong used blood transfusions from 2001 to 2005.

Kristin Armstrong, Armstrong's former wife, handed out cortisone tablets wrapped tightly in foil to the team at the 1998 world championships.

Riders were given water bottles containing EPO as if they were boxed lunches. Jonathan Vaughters said the bottles were carefully labeled for them: "Jonathan - 5x2" meant five vials of 2,000 international units each of EPO were tucked inside. Once when Vaughters was in Armstrong's room borrowing his laptop, Armstrong injected himself with EPO and said, now "that you are doing EPO too, you can't go write a book about it."

Landis was asked to baby-sit the blood inside the refrigerator of Armstrong's apartment, just to make sure the electricity did not go out and the blood did not spoil.

"EPO all in my veins; Lately things just don't seem the same; Actin' funny, but I don't know why; 'Scuse me while I pass this guy."

Tyler Hamilton, another teammate, said Armstrong squirted a mixture of testosterone and olive oil into Hamilton's mouth after one stage of the 1999 Tour.

At the same time the drug use was nonchalant, it was also carefully orchestrated by Armstrong, team management and team staff, the antidoping agency said.

"Mr. Armstrong did not act alone," the agency said in its report. "He acted with the help of a small army of enablers, including doping doctors, drug smugglers, and others within and outside the sport and on his team."

Armstrong relied on the Italian doctor Michele Ferrari for training and doping plans, several riders said. Armstrong continued to use Ferrari even after he publicly claimed in 2004 - and testified under oath in an insurance claims case - that he had severed all business ties with Ferrari. 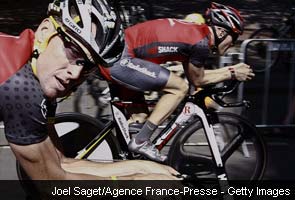 The antidoping agency noted that Armstrong had sent payments of more than $1 million to Ferrari from 1996 through 2006, based on financial documents discovered in an Italian doping investigation.

Ferrari was a master at reducing the riders' chances of testing positive, several cyclists said, so much so that Hincapie said he was not fearful he would test positive at the 2000 Tour because of Ferrari's tricks.

As an example of the extreme care the team would take to avoid positive tests, the doctor suggested that the riders inject EPO directly into their veins instead of under their skin, which would lessen the possibility that the drug would be picked up by tests. He pushed the use of hypoxic chambers, which he said also reduced the effectiveness of the EPO test.

Bruyneel, Armstrong's longtime team manager, and team doctors played a key role in the doping scheme. They would often indoctrinate young riders into the doping program, the riders said.

In his affidavit, Vande Velde recalled Bruyneel took over as the team director after the 1998 season and brought in the new team doctor, Luis Garcia del Moral, who was fond of giving riders injections.

"He would run into the room and you would quickly find a needle in your arm," Vande Velde said, adding that when he would ask questions about the treatment, del Moral "would say things like I was 'bloated' or 'blocked' and needed 'vitamins.' " Vande Velde added that "whatever he injected was always described as vitamins."

In 1999, del Moral offered Vande Velde testosterone, and Vande Velde knowingly doped for the first time, using testosterone mixed in olive oil. The cyclist then discussed the program with Bruyneel because he was nervous about it. "He said not to worry if I felt bad at first, that I would feel good at the end," Vande Velde said.

Zabriskie was also anxious about using drugs and asked Bruyneel how safe it was to use them.

He barraged him with questions: Would he be able to have children? Would it cause any physical changes? Would he grow larger ears? Bruyneel's response: "Everyone is doing it."

The team's doctors came up with fake maladies so that riders could receive an exemption to use drugs like cortisone, several riders said. When Armstrong tested positive for cortisone during the 1999 Tour, Armstrong produced a backdated prescription for it, for saddle sores. Hamilton said he knew that was a lie.

Riders said they felt that they needed to dope to stay at the top of the sport and stay on the team. Armstrong was instrumental in the hiring and firing of team personnel and pressured riders to stay on a doping program, the antidoping agency said.

The evidence made clear, the agency said, that Armstrong's drug use was extensive, and that he also was the linchpin holding the team's doping program together. It said that is why it barred him from Olympic sports for life and stripped him of his record seven Tour victories.

"It was not enough that his teammates give maximum effort on the bike, he also required that they adhere to the doping program outlined for them or be replaced," the antidoping agency said in its report. "He was not just a part of the doping culture on his team, he enforced and reinforced it."