Sportswear company Skins is suing cycling's governing body for $2 million, claiming its brand has been damaged by backing the sport as the Lance Armstrong doping scandal unraveled. 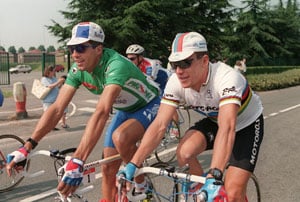 Sportswear company Skins is suing cycling's governing body for $2 million, claiming its brand has been damaged by backing the sport as the Lance Armstrong doping scandal unraveled.

Skins, which was founded in Australia and is based in Switzerland, has sponsored cycling teams and riders for five years, and supplied race suits for the United States at the London Olympics.

While Skins has never sponsored Armstrong or the UCI, it wants compensation for the reputational damage it says it has suffered by investing in a sport "tarnished" by doping.

"Skins was under the illusion that professional cycling had been fundamentally reformed to contain doping and to minimize the risks of scandals with which the brand of any sponsor could be associated," lawyer Cedric Aguet wrote Friday in a letter to the UCI that was released Sunday.

"It has now been proven that these legitimate expectations have been betrayed on the grounds you are aware of."

The UCI recently agreed to strip Armstrong of his seven Tour de France titles and ban him for life, following a report from the U.S. Anti-Doping Agency that accused him of leading a massive doping program on his teams.

UCI President Pat McQuaid has agreed to create a commission to examine allegations about the governing body's conduct raised by USADA.

Aguet's letter claimed that the way the UCI, McQuaid and former president Henricus Verbruggen have organized the fight against doping and dealt with the Armstrong case "is the main cause for the total loss of confidence in professional cycling by the public, which harms SKINS, as well as any other sponsor or supplier."

Skins has had a partnership with the Rabobank team, which lost its title-sponsor last month when the Dutch bank pulled out over the damage caused by the Armstrong case.

"We believe that until it was forced into action by USADA's comprehensive report, the UCI fundamentally failed to acknowledge the issues or act to save the credibility of cycling or its commercial partners," Fuller said.

The UCI is taking moves to try to restore its reputation.

McQuaid has pledged to create a commission to examine allegations about the governing body's conduct raised by USADA, including that Armstrong donated $125,000 in exchange for covering up suspicious doping tests.

In a criminal complaint filed against the UCI last week, Irish journalist Paul Kimmage said there are "strong suspicions" that the UCI and its leaders, either directly or indirectly, helped Armstrong earn "significant sums of money in and out of competition while he was doped."