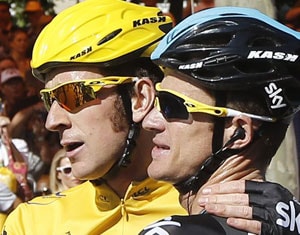 The last time two riders from the same nation finished first and second in the Tour was in 1984, when Frenchman Laurent Fignon defeated Bernard Hinault.

Cavendish claimed his 23rd Tour stage win and third this year. He also became the first reigning world champion to win on the Champs-Elysees.

As expected, Wiggins repaid Cavendish for his efforts earlier in the race and led the Sky train in the final mile of the 74-mile stage before leaving his place to Edvald Boasson Hagen, who delivered a perfect lead-out for Cavendish.

Cavendish accelerated coming out of the final corner, never looked back and raised four fingers as he crossed the line.

The seven stage wins was a record haul for British riders in the Tour, beating the previous record of six stage wins in 2009 - when all were won by Cavendish.

This time the victories were divided up between Cavendish (3), Wiggins (2), David Millar (1) and Froome (1).

Wiggins and his teammates were at the font of the pack as it arrived on the streets of Paris for eight laps of a 4-mile circuit on the Champs-Elysees.

With Sky determined to help Cavendish secure a fourth consecutive win in Paris, Horner and Hincapie were immediately reined in. Several other riders tried to break away but the peloton was not ready to give them any slack as the race passed some of the capital's most iconic monuments such as the Louvre museum, the Eiffel tower and the Place de la Concorde.

Six riders including Jens Voigt of Germany finally escaped from the back with 18 miles to go. They had a maximum lead of 30 seconds but were progressively reeled in as Liquigas and Sky organized the chase.

Comments
Topics mentioned in this article
Andy Murray Tennis Cycling
Get the latest updates on India vs England Series, India vs England , live score and IPL 2021 Auction . Like us on Facebook or follow us on Twitter for more sports updates. You can also download the NDTV Cricket app for Android or iOS.