South Australia Premier Jay Weatherill said the state would seek the repayment of several million dollars in appearance fees paid to Armstrong for competing in the Tour Down Under cycle race in 2009, 2010 and 2011. 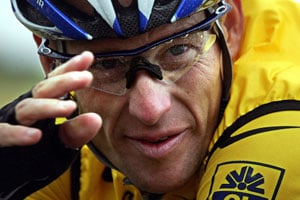 The government of South Australia state said on Tuesday it will seek damages or compensation from Lance Armstrong after his reported confession to Oprah Winfrey that he doped during his career.

Roger Federer, meanwhile, wants to hear the confession for himself.

South Australia Premier Jay Weatherill said the state would seek the repayment of several million dollars in appearance fees paid to Armstrong for competing in the Tour Down Under cycle race in 2009, 2010 and 2011.

Weatherill said reports Armstrong admitted doping during a recorded interview with Winfrey, due to be broadcast in the United States on Thursday, changed the government's view on its entitlement to compensation.

He said Armstrong "has deceived the cycling community around the world" by repeatedly denying he used performance-enhancing drugs during a career in which he won the Tour de France seven times.

"We'd be more than happy for Mr. Armstrong to make any repayment of monies to us," Weatherill said.

Speaking from the Australian Open at Melbourne Park after advancing easily into the second round with a 6-2, 6-4, 6-1 win over Benoit Paire, Federer said he'd be "intrigued to hear the interview."

"There has been a lot of talk about it, and obviously, you know, a lot of focus on Lance and the cycling part," the 17-time Grand Slam winner said. " It's obviously been a difficult situation for the whole of the sport and for him and all the people involved. So I've got to get the facts right and just hear what he said, really."

Weatherill refused to say how much the South Australian state government paid to Armstrong to secure his participation in the ProTour race for three-straight years.

Armstrong chose the Australian cycle tour, the first event of the annual ProTour, to make his return to professional cycling in 2009 after a two-year retirement. He also made the six-stage road race his last professional race before his final retirement in 2011.

The South Australian government paid appearance fees to Armstrong to build the profile of the race and promote tourism. That effort was hugely successful and in each of the years Armstrong competed, hundreds of thousands watched the race live and millions more saw it on television.

Armstrong has never tested positive for performance-enhancing drugs and for a decade he strenuously denied doping and resorted to lawsuits to protect his reputation.

The publication of a damning 1,000-page report by the United States Anti-Doping Agency, which placed Armstrong at the center of what it called one of the most sophisticated doping operations in sports, has led to counter-suits against the rider.

Those who had been successfully sued by Armstrong, including Britain's Sunday Times newspaper, are now seeking repayment of the damages they were forced to pay. Others are seeking repayment of sponsorships and prize money paid during Armstrong's career as the world's most famous professional cyclist.

Comments
Topics mentioned in this article
Tennis Stanislas Wawrinka David Ferrer Rafael Nadal Roger Federer Cycling Novak Djokovic Andy Murray Bernard Tomic
Get the latest updates on ICC T20 Worldcup 2022 and CWG 2022 check out the Schedule, Live Score and Medals Tally. Like us on Facebook or follow us on Twitter for more sports updates. You can also download the NDTV Cricket app for Android or iOS.