Spin legend Warne, captaining the Melbourne Stars against city rivals Renegades in the domestic Big Bash tournament, was furious that Samuels pulled back David Hussey when the batsman was turning for a second run. 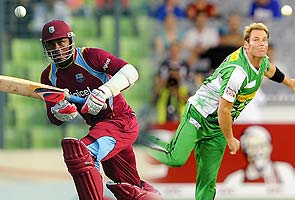 Australian star Shane Warne and West Indian international Marlon Samuels were Monday charged with misconduct after an ugly, foul-mouthed clash during a Twenty20 match in Melbourne.

Spin legend Warne, captaining the Melbourne Stars against city rivals Renegades in the domestic Big Bash tournament on Sunday, was furious that Samuels pulled back David Hussey when the batsman was turning for a second run.

And when Samuels was batting later in the game, Warne confronted the West Indian with the words "F*** you, Marlon."

In the next over, Warne, in the field, threw the ball at the Jamaican's chest and Samuels reacted by tossing his bat down the pitch towards the Australian.

The two players squared up and had to be separated by the umpires.

Warne, who was wearing a microphone for on-field comments to aid TV coverage, told commentators: "What are you meant to do when someone throws a bat at you?"

Samuels was later forced to retire hurt when he top-edged a Lasith Malinga delivery into his eye. With blood gushing from his face, he needed hospital treatment.

Cricket Australia on Monday charged both players with multiple breaches of its code of behaviour.

Warne was accused of serious dissent at an umpire's decision, throwing the ball at a player in an inappropriate or dangerous manner, using obscene language and deliberate physical contact.

Stars' batsman Cameron White was also charged with dissent in a game the Renegades won by nine wickets in front of a record Australian domestic Twenty20 crowd at the Melbourne Cricket Ground of 46,581.

Post-match, Warne denied trying to hit Samuels with the ball and passed off their altercation as a "heat of the moment thing".

"I'm more disappointed with the loss to be fair," Warne said.

The date for the hearings is yet to be announced.

Comments
Topics mentioned in this article
Cricket Shane Warne Marlon Samuels David Hussey
Get the latest updates on ICC T20 Worldcup 2022 and CWG 2022 check out the Schedule, Live Score and Medals Tally. Like us on Facebook or follow us on Twitter for more sports updates. You can also download the NDTV Cricket app for Android or iOS.