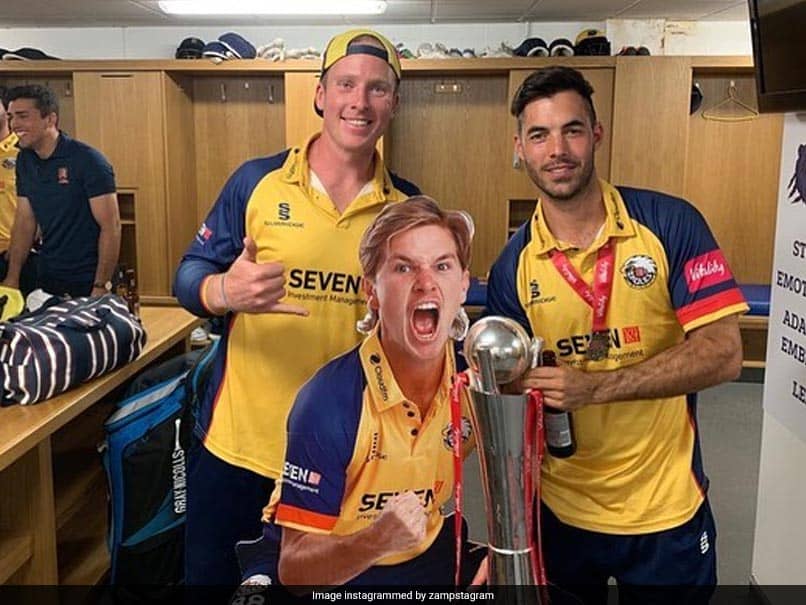 Australia spinner Adam Zampa, back home for the domestic one day tournament, missed out as his team Essex Eagles took home the Vitality Blast trophy in a last-ball thriller at Edgbaston. But Essex made sure that the legspinner did not miss out on the victory celebrations - or so the photo albums will say! Zampa took to social media site Instagram to share photos of his Essex teammates posing with cardboard cutouts of him in different headgear after their win over Worcestershire Rapids.

The cardboard cutouts are of Zampa in celebratory poses in different headgear. In the photos shared by Zampa, his teammates can be seen celebrating along with his cutouts. The team even took a cutout to the trophy presentation, and while he may not have had the champagne, his presence was surely made to be felt.

purple but blue it's apricot

Zampa, who is known for his witty presence on social media, captioned the images "purple but blue it's apricot".

The Essex Eagles won the Vitality Blast final in dramatic fashion. Having won the toss, Essex captain Simon Harmer chose to field first. He then took 3-16 in his four overs and helped restrict Moeen Ali-led Worcestershire to 145/9.

They stuttered in their chase until Ravi Bopara, who was pushed down the order to function as a finisher, blasted 36 off 22 deliveries to take the Eagles closer to the title.

The Essex skipper, who performed magnificently with the ball, was also the one to guide his team to victory, hitting consecutive boundaries off the last two deliveries to defeat the defending champions.