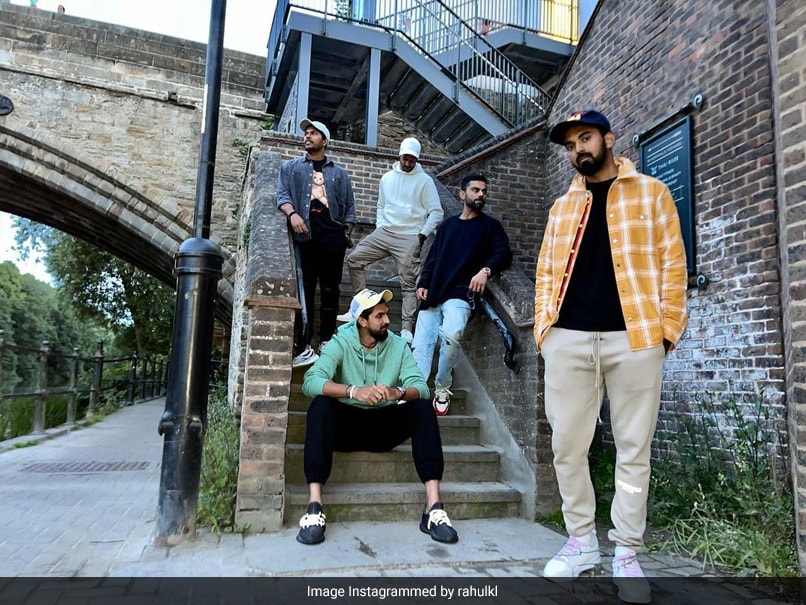 The members of the Indian team in England are back in the bio-bubble and have started training for the upcoming five-match Test series against the hosts. The Indian players were awarded a short break from bio-bubble life and cricket after the conclusion of the World Test Championship (WTC) final against New Zealand. And, if the photographs and reels on Indian players' Instagram handles are anything to go by, then the Virat Kohli-led outfit took full advantage of their break.

Several breathtaking photographs of the players with their wives and girlfriends have been doing the rounds on the internet in the past few weeks. And on Friday, India and Punjab Kings (PBKS) cricketer KL Rahul shared a couple of very cool pics on Instagram.

In the first picture, Rahul could be seen posing his teammates, including skipper Virat Kohli. The photograph also featured Indian opener Mayank Agarwal, and seamers Ishant Sharma and Umesh Yadav.

Fans were also in awe of Athiya's photography skills as they heaped praise on her in the comments section of the post.

"Means how Athiya should be a professional," the user wrote.

Another user expressed his happiness at seeing some of the Indian stars in one frame.

"Finally a picture together," said a user.

Meanwhile, the Indian team will return to action next week when they take on Joe Root-led England in the first match of the five-match Test series, starting on August 4.

Umesh Yadav Cricket
Get the latest updates on IPL 2021, check out the IPL 2021 Schedule and Indian Premier League Live Score . Like us on Facebook or follow us on Twitter for more sports updates. You can also download the NDTV Cricket app for Android or iOS.