Two Pakistan cricketers took bribes to fix parts of a match against England in a case that exposes "rampant corruption" at the heart of the international game, a prosecutor told a London court on Wednesday. 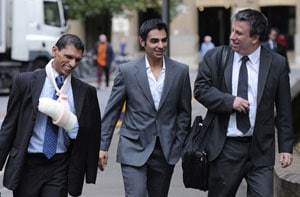 Pakistan players took bribes to bowl deliberate no-balls during a match against England in a case that exposes "rampant corruption" at the heart of international cricket, a court heard on Wednesday.

Former captain Salman Butt, 26, and fast bowler Mohammad Asif, 28, deny charges of conspiracy to obtain and accept corrupt payments, and conspiracy to cheat at gambling, relating to the fourth Test at Lord's in August 2010.

A third Pakistan player, prodigal young bowler Mohammad Amir, and Butt's British agent Mazhar Majeed have also been charged with the same offences but they are not standing trial alongside Butt and Asif in London.

"This case reveals a depressing tale of rampant corruption at the heart of international cricket, with the key players being members of the Pakistan cricket team," prosecutor Aftab Jafferjee said in his opening statement to Southwark Crown Court.

"It is the prosecution's case that all four men were involved -- and by the time the last Test match at Lord's took place each of them was well at it -- the two bowlers being orchestrated by their captain, and the captain's agent Majeed, to bowl three no-balls at a pre-arranged point in the game," he said.

Jafferjee added: "Their activity represents, say the Crown, a betrayal by them of their own team, their own board of cricket, and most damaging of all a betrayal of the sport of cricket itself -- and all for greed."

The allegations of so-called "spot-fixing" stem from an investigation by the Rupert Murdoch-owned News of the World tabloid, which was closed down in July when it became engulfed in Britain's phone-hacking scandal.

The paper's former undercover reporter Mazher Mahmood -- nicknamed the "fake sheikh" for sometimes wearing Arab dress -- learned of allegations that Majeed was involved in fixing and decided to investigate while posing as a member of a betting syndicate, Jafferjee said.

The case showed the influence of the betting industry and that the "vast" sums of money it deals with were threatening the integrity of the game, prosecutor Jafferjee said.

He said the amounts of money turned over in the sub-continent were "simply breathtaking... in the region of $40 and $50 billion (30 to 37 billion euros)" per year.

Asif sat in court wearing a brown pinstripe suit and a white shirt, with a white folder on his lap. He listened to an Urdu-speaking translator sat to his left.

Butt told British police in an interview that the timing of the no-balls exactly when Majeed told the journalist they would be bowled was "a series of freakish occurrences", the prosecutor said.

Asif told detectives it was "just chance", he added.

The case started late after a new jury had to be sworn in on Wednesday when a member of the previous jury fell sick. Butt and Asif stood in court to confirm they had no objection to the jurors.

In his statement, Jafferjee also sought to play down concerns about the News of the World's involvement in the case.

"Whatever views one might hold about that publication," Jafferjee said, "Were this investigation not to have been permitted, the activity of 'fixing' would almost certainly have continued -- unabated, unaccountable -- and beyond the reach of the law."

He added that he had to assume that some members of the jury did not know the rules of cricket, especially the no-ball rule, and showed them a diagram featuring the popping crease line.

A no-ball is called if the bowler's front foot lands ahead of it, he said, adding: "Which is why it is so attractive to fixing, because the answer is 'whoops.'"

The charges against the pair carry maximum sentences of seven years and two years in prison respectively.

At the time of the alleged offences, Butt was captain of Pakistan's Test side and had won plaudits for his leadership of the team.

Asif was the team's senior pace bowler, while teenage left-arm swing bowler Amir was regarded as one of the hottest properties in world cricket.

Comments
Topics mentioned in this article
Cricket Pakistan Cricket Team New Zealand Cricket Team Mohammad Asif Mohammad Amir
Get the latest updates on IPL 2021, IPL Points Table , IPL Schedule 2021 , live score . Like us on Facebook or follow us on Twitter for more sports updates. You can also download the NDTV Cricket app for Android or iOS.