New Zealand captain Ross Taylor has been ruled out of Sunday's Twenty20 against West Indies in Florida with a shoulder injury, which is likely to keep him out of early part of the one-day series that begins on July 5 as well. 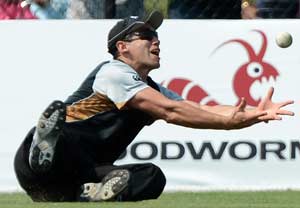 New Zealand captain Ross Taylor has been ruled out of Sunday's Twenty20 against West Indies in Florida with a shoulder injury, which is likely to keep him out of early part of the one-day series that begins on July 5 as well. Left-arm spinner Ronnie Hira, too, has also been ruled out of the second Twenty20, after dislocating his finger during Saturday's game.

"Unfortunately, Ross sustained a grade two injury to his left AC joint during the game [on Saturday]," New Zealand physio, Paul Close, said. "It was confirmed by the x-ray and MRI scan completed at the hospital. At this stage the injury looks like it will exclude him from selection for tomorrow's match and for the first part of the ODI series."

New Zealand are yet to name a stand-in captain. The regular vice-captain, Brendon McCullum, has been rested for the limited-overs leg of the Caribbean tour.

Hira was one of two other New Zealand players injured during the game. He will fly home to New Zealand, as he is not part of the ODI squad. "Scans [on Hira's hand] showed there wasn't a fracture but the skin has split and he is required to wear a splint," Close said. "He will return to New Zealand to undergo further assessment and a period of rehabilitation."

Allrounder Jacob Oram, who jarred his left knee while fielding, will undergo a fitness test prior to Sunday's match. "Jacob has suffered a minor knee strain. At this stage the injury appears to be relatively minor but we will know more after period ice treatment and rest," Close said. "We will reassess in the morning and complete a fitness test before the match if necessary."

Taylor hurt his shoulder while attempting a catch to dismiss Kieron Pollard in the 17th over - he circled under a top-edged a pull in the fine-leg region, before falling heavily on his left shoulder. He stayed on the field for the remainder of the West Indies innings, before coming out to bat. However, he was only able to face 11 deliveries for 10 runs before retiring hurt.

This is the third time Taylor is out of action due to injury this year. He had picked up a calf injury during the one-off Test against Zimbabwe in January, following which he missed limited-overs series against Zimbabwe and South Africa. He returned for the South Africa Tests, only to suffer a broken forearm in the Wellington Test, after being hit by a Morne Morkel delivery while batting. That injury had kept him away from competitive cricket for about 20 days. New Zealand did not have any fixtures in that period, but he missed the early part of IPL 2012 for Delhi Daredevils.

Comments
Topics mentioned in this article
Cricket Ross Taylor Brendon McCullum Pakistan Cricket Team New Zealand Cricket Team Gary Kirsten Ravi Rampaul MS Dhoni Bangladesh Cricket Team Jacob Oram
Get the latest updates on SA vs IND 2021-22, check out the Schedule and Live Score . Like us on Facebook or follow us on Twitter for more sports updates. You can also download the NDTV Cricket app for Android or iOS.