"Reunited": Sakshi Reacts As MS Dhoni Joins Other CSK Stars Ahead Of IPL 2020

Suresh Raina took to social media to share a picture with MS Dhoni along with other CSK stars. 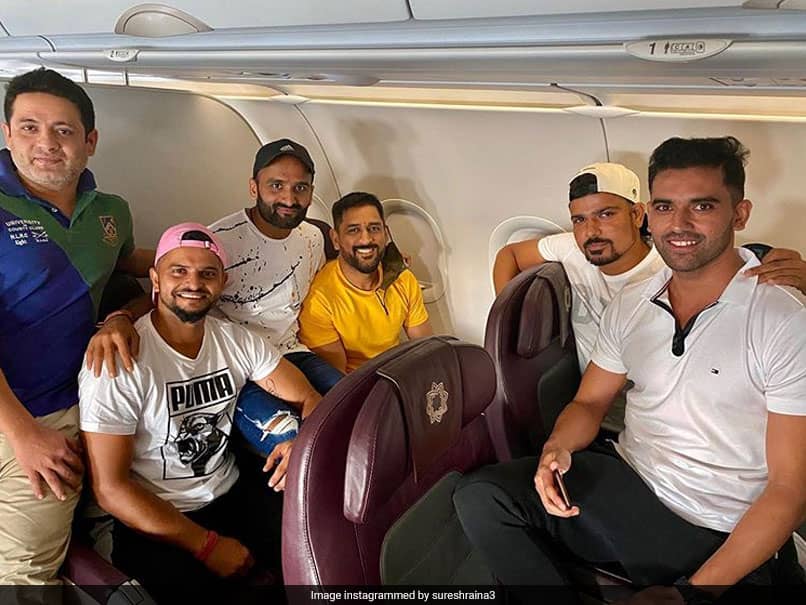 Suresh Raina reunited with MS Dhoni and other CSK stars ahead of the IPL 2020.© Instagram

Chennai Super Kings fans got a glimpse of their captain MS Dhoni as Suresh Raina took to Instagram on Friday to share a picture with his IPL teammates. In the picture, Raina can be seen sitting with Dhoni, Piyush Chawla, Deepak Chahar, Karn Sharma and Monu Kumar in an airplane. Not just the fans but even former India captain's wife Sakshi Dhoni couldn't hide her excitement as Dhoni "reunited" with his IPL teammates ahead of the 13th edition of the franchise-based tournament.

CSK too took to social media to share a picture of MS Dhoni and captioned it as "Thala Dharisanam Reloaded!"

The Chennai-based franchise will look to equal Mumbai Indian's record of four title wins as the action shifts to the UAE due to the coronavirus pandemic.

The IPL 2020 will start on September 19 in the UAE and all the matches will be played across three venues; Sharjah, Abu Dhabi and Dubai.

The final of the tournament will be played on November 10.

All franchises will have to go through at least five rounds of testing before they could train in the UAE as mandated in the standard operating procedures (SOPs) shared by the BCCI with the franchises.

It will be the first time since India's exit from the 2019 World Cup that MS Dhoni will return to the field.

Despite MS Dhoni not featuring in any competitive game since July last year, CSK's CEO is confident that the former India skipper will represent Chennai for the next two years in the T20 league and will probably be around for the 2022 IPL as well.

Karn Sharma Monu Kumar Cricket
Get the latest updates on IPL 2021, IPL Points Table , IPL Schedule 2021 , live score . Like us on Facebook or follow us on Twitter for more sports updates. You can also download the NDTV Cricket app for Android or iOS.