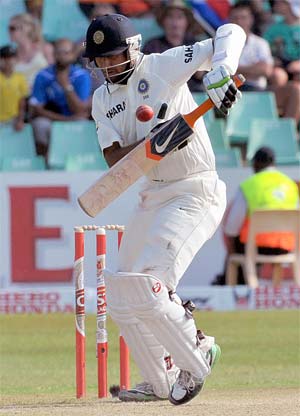 After beating Madhya Pradesh by 227 runs in their last league match, hosts Saurashtra will be up against Karnataka in what promises to an evenly-contested quarterfinal match starting on Sunday at the Saurashtra University ground here.

"This is a knock-out match...we are hopeful of doing well," Jaydev Shah, Saurashtra skipper, said.

Shah denied that Saurashtra will rely on Pujara only.

"We are not depending on individuals but everyone has do his job," he said, adding that not only Pujara, but bowlers Dharmendra Jadeja and Kamlesh Makwana too have played crucial role helping Saurashtra to enter into knock-out rounds.

"This would be the first match on this ground and it's difficult to predict the track," Shah said adding that it might be a turning track, helping spinners on the second day of the five-day match.

Stuart Binny, Karnataka captain, too said, "We don't know how the wicket will behave as we both are going to play first time on this ground and therefore Saurashtra will not have any advantage of playing at home."

Saying that Karnataka will go for outright win, Binny said, "We are depending on our top six batsmen. Once they click, it would be easy for our bowlers. Robin Uthappa, Manish Pandey, Kunal Kapoor, Ganesh Satish and C M Gautam would be the batting mainstays for Karnataka. Gautam has struck two double centuries this season while Ganesh Satish made unbeaten 200 against Tamil Nadu.

The visitors will miss the services of main strike bowler Vinay Kumar, who has sustained injury and undergoing rehabilitation programme at NCA in Bangalore.

Comments
Topics mentioned in this article
Cricket Wasim Jaffer Irfan Pathan Vikram Solanki Paul Valthaty Virat Kohli Cheteshwar Pujara SAU
Get the latest updates on ICC T20 Worldcup 2022 and CWG 2022 check out the Schedule, Live Score and Medals Tally. Like us on Facebook or follow us on Twitter for more sports updates. You can also download the NDTV Cricket app for Android or iOS.