"Was Very Nervous": Rohit Sharma Recalls His First Meeting With Rahul Dravid In 2007

Rohit Sharma, who made his international debut under the captaincy of Rahul Dravid, has recalled his first interaction with the newly-appointed head coach of Team India. 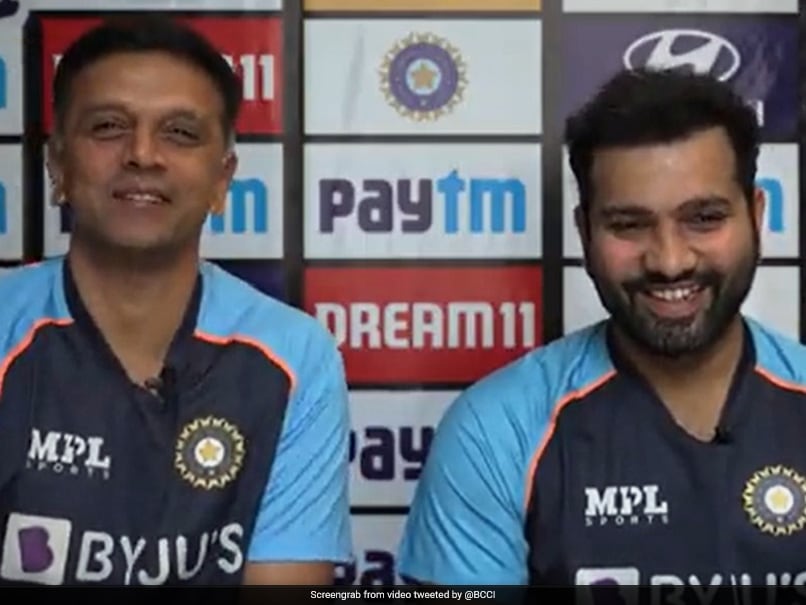 Rahul Dravid and Rohit Sharma recalled their first interaction in 2007 on Tuesday.© Twitter

Rohit Sharma, who made his international debut under the captaincy of Rahul Dravid, has recalled his first interaction with the newly-appointed head coach of Team India. Rohit, who has been named as captain of India's T20 team for the upcoming series against New Zealand, is hoping to take Indian cricket to greater heights in their new partnership. Since making his debut against Ireland in an ODI in 2007, Rohit has gone on to become one of the best batters in white-ball cricket.

Dravid, on the other hand, is hoping to replicate his success as a player in his new role as the head coach of Team India. He replaces Ravi Shastri after successful stint as the National Cricket Academy (NCA) chief.

Both vividly recalled their first interaction on the eve of the first T20I against New Zealand at the Sawai Mansingh Stadium in Jaipur.

"We were talking about it yesterday on the bus. I guess time flies, doesn't it? I actually remember Rohit even before the Ireland series when we were playing a challenger in Madras," Dravid said during the pre-match press conference.

Head Coach Rahul Dravid rekindles his first meeting with a young @ImRo45 & lauds the #TeamIndia T20I captain for his contribution towards the Indian cricket. #INDvNZ pic.twitter.com/croLaIElLu

"We all knew that Rohit was going to be special. We could just see that he was a very special talent. That I would so many years later be working with him that I never thought about or envisaged....

"... but honestly, the way he has grown as a leader, as a person over these last 14 years now. What he's achieved both as an India player and as a leader for the Mumbai Indians has been phenomenal," he added.

"Having to carry the legacy of obviously Mumbai cricket and Indian cricket is not an easy one and he's done it with a lot of grace and class," Dravid said.

Rohit also recalled his side of the story, as he was reminded about his international debut in the presence of stars like Dravid.

"It was way back in 2007 when I was selected, but the first time I had the opportunity to interact with him was in Bangalore at a camp," said Rohit.

"It was a very brief chat and I was actually kind of very nervous and I never used to talk so much even with my age group people so leave alone these guys at that point.

"So I was just quietly doing my things and getting a move on with my game. But yeah in Ireland the first time when he came and told me that you will be playing this game I was on the moon that, obviously felt like a dream to be part of the dressing room," he added.

"It's been a long way since then. I have cherished all the moments that I've spent playing for India and also for my franchisee, Mumbai Indians. And we look forward to many more," Rohit further stated.

Rohit Sharma
Get the latest updates on SA vs IND 2021-22, check out the Schedule and Live Score . Like us on Facebook or follow us on Twitter for more sports updates. You can also download the NDTV Cricket app for Android or iOS.