Watch: All 26 Sixes From England's Record-Breaking Innings vs Netherlands In 1st ODI

England hit a world record one-day international score of 498-4 to crush the Netherlands by 232 runs in Amstelveen on Friday. 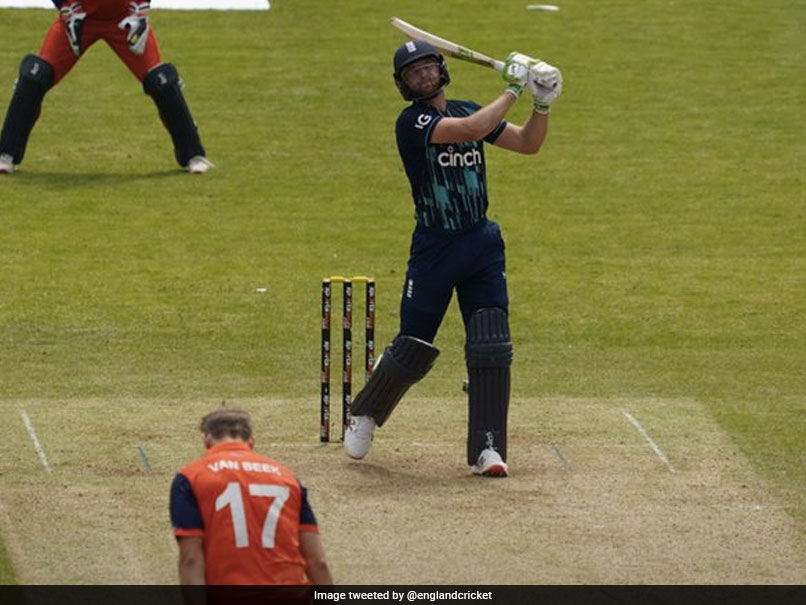 Jos Buttler in action against Netherlands in the first ODI.© Twitter

England smashed their way to a new world record on Friday, posting the highest-ever total in the history of One-Day International (ODI) cricket. On the receiving end were the Netherlands bowlers, who were plundered for a record 498 for four at the VRA Cricket Ground in Amstelveen by a rampant English side. Jos Buttler, who finished on 162 not out, led the carnage, bringing up his ton off just 47 balls. Liam Livingstone, batting at number six, made the fastest 50 in England's ODI history off just 17 balls -- the joint second-fastest of all-time. In all three England batters scored centuries in the run blitz.

Apart from beating their own mark of 481 for six set against Australia at Trent Bridge in 2018, another record that England broke was of the number of sixes hit in an innings. England hit a jaw-dropping 26 sixes, surpassing their own previous best of 25 achieved when they scored 397 for six against Afghanistan in 2019.

Watch: All the 26 sixes from the England's record-breaking innings

All 26 sixes from our new world record

"I have certainly tried to back my six-hitting more than I have done in previous years. I am going to try and hit a lot more sixes... and that was really the plan today," said Buttler, who accounted for 14 out of the 26 sixes that England hit.

Apart from Buttler, Philip Salt (122 off 93) and Dawid Malan (125 off 109) also hit centuries as the English made merry in Amstelveen.

In reply, the Netherlands put up a brave fight, posting 266 all-out -- a respectable score against the one-day world champions on any other day.

Top scorer was veteran wicket-keeper Scott Edwards, who carved out a patient 72 not out and put on a spirited 59-run partnership with Seelaar before the skipper was clean bowled by David Willey for 25.

Jos Buttler Dawid Malan Liam Livingstone Netherlands vs England, 1st ODI Cricket
Get the latest updates on Fifa Worldcup 2022 and check out  Fifa World Cup Schedule, Stats and Live Cricket Score. Like us on Facebook or follow us on Twitter for more sports updates. You can also download the NDTV Cricket app for Android or iOS.