Kane Williamson cracked an undefeated 105 at Sabina Park in the first Test, spiced with 11 boundaries off 263 balls in 323 minutes. 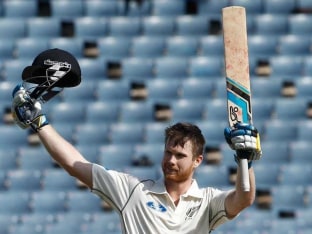 In reply, the West Indies safely negotiated nine overs to reach 19-0 at stumps at Sabina Park. Home favorite Chris Gayle, celebrating his 100th test, was unbeaten on eight while Kieran Powell was 11 not out.

Earlier, Neesham lashed 11 fours and two sixes in his 107, becoming only the eighth man to reach three figures in each of his first two tests. The 23-year-old Neesham scored a century on his debut against India at Wellington in February.

The Otago left-hander got able assistance from Watling, who hit seven fours and one six before he was dismissed in the final session seeking quick runs.

Neesham and Watling's sixth wicket stand of 201 boosted New Zealand after they wobbled slightly after resuming on 240-2.

Off-spinner Shane Shillingford (3-145) soon added the scalp of Ross Taylor for 55. The former skipper chipped an ondrive to Kirk Edwards at midwicket.

New Zealand quickly dipped to 279-5 when Benn got one to turn and bounce. Captain Brendon McCullum edged to Chris Gayle at slip via the shoulder of wicketkeeper Denesh Ramdin.

But Neesham and Watling dominated the rest of the day to blunt the West Indies attack.

Neesham eventually fell to a catch behind off Benn but Tim Southee blasted 21 not out off seven balls to keep the momentum with the Kiwis.

Watling, who survived one difficult chance when West Indies captain Denesh Ramdin floored a thick edge off Gayle's off-spin when he was 48, fell 11 runs short of a fourth test ton when he holed out to deep midwicket.