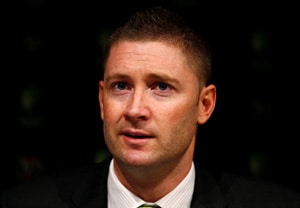 Australian cricket captain Michael Clarke on Wednesday said he had no problem with a controversial run out rule that marred the fifth and final one-day international between England and Sri Lanka.

His England counterpart Alastair Cook insisted a "line had been crossed" after Sachithra Senanayake ran out England's Jos Buttler as the non-striker backed up at Edgbaston on Tuesday. But Clarke said the dismissal was in the rules.

"At the end of the day I think as long as the player's warned it's obviously in the rules so you can make whatever decision you want," he said.

At the end of the day it's in the rules. "Sri Lanka captain Angelo Mathews, asked by the umpires if he wanted to uphold what was a legitimate appeal, did not call Buttler back and the wicketkeeper was out for 21. Sri Lanka went on to beat England by six wickets and clinch a 3-2 series victory.

Cook said he had never seen it before in a game. "I was pretty disappointed with it to be honest with you. You don't know what you'd do if you were put in that situation, the heat of the moment, until you are. I'd hope I wouldn't do it," he said.

It was only the eighth reported instance of a batsman being run out backing up in an international match and the first since South Africa's Peter Kirsten was dismissed by India's Kapil Dev in 1992/93. Even though 'Mankading', the term coined after India's Vinoo Mankad ran out Australia non-striker Bill Brown during the 1947/48 Sydney Test, remains a legitimate dismissal, some regard it as against the 'spirit of cricket'.