Kolkata Knight Riders bowling coach Wasim Akram said Gautam Gambhir's leadership has made a big difference in how the team has played this season, ending up being the Indian Premier League champions for the second time in three years. 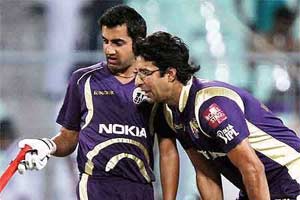 "It means a lot to the team when the skipper is performing well. It adds to the security and the self belief.

He has led his troops very well. I believe he was the best captain in this IPL," Akram told the IPL's official website.

Kings XI Punjab rode on an unbeaten 115 from Wriddhiman Saha to post 199 for 4 in 20 overs but Gambhir was never unnerved and backed his bowlers. Akram was all praise for his captain's positivity. (Highlights)

"...from the 11th to the 15th over of the KXIP innings, instead of looking for dot balls -- which most captains do during that phase of the innings -- he encouraged his bowlers to bowl for wickets. That aggressive mindset and the belief he puts in his players makes him the best captain in the tournament," the Sultan of Swing added. (Read: Manish Pandey, Kolkata's Knight in Shining Armour)

KKR became only the second IPL team after Chennai Super Kings to win the tournament twice and Akram credits excellent teamwork for the outcome.

"Our job is to keep things simple. We talk to the point and don't have long meetings. We just try to keep them relaxed and lend any assistance they need. That is the mantra that Trevor Bayliss and I go by. The credit goes to the captain and his team. We are here just to support them," said Akram. (Read: Gambhir happy to prove naysayers wrong)

As Yusuf Pathan enjoyed his third IPL triumph -- his first coming in the inaugural season with Rajasthan Royals -- Akram celebrated his second title win. Tell Akram that he has been lucky for the team and the humble left-armer credits it to many more factors.

"It feels out of this world, but this time we're a lot calmer as well. The best thing about this team is that every member is enjoying each other's success and company. The foreign players and the Indian boys are really close, and that's great to see as a mentor," said Akram.

Kolkata were lying at the bottom half of the table with four consecutive losses early in the tournament but rose like a phoenix to win nine games on the trot. The former Pakistan skipper said the mantra was to keep things simple.

"Our job is to keep things simple. We talk to the point and don't have long meetings. We just try to keep them relaxed and lend any assistance they need. That is the mantra that Trevor Bayliss and I go by. The credit goes to the captain and his team. We are here just to support them," said Akram.

Known to accommodate a lot of spinners in the team including Sunil Narine, Piyush CHawla and Shakib Al Hasan, KKR also boasted of a number of pacers this season. Akram said that it has been special working with the likes of Morne Morkel and Umesh Yadav.

"Yes, we've had a number of pace bowlers this year. They are all intelligent bowlers and hard working cricketers. It has been special working with so many pacers who are all so different from one another. There's not much more you can ask as a coach" said the bowling consultant.

Orange cap holder Robin Uthappa has been a steady force behind the teams' triumph and Akram insists that promoting him as opener after a the initial games was one of the moves that paid off.

"This was a new team with new combinations, and it took us five-six games to get it right. We realised that this guy would be better opening the batting and he proved us right. He was consistency and class personified," concluded Akram.