Pietersen posted a small video of his innings with the caption "#AboutLastNight if you have a minute". The video shows Pietersen smashing the ball to all parts of the ground. 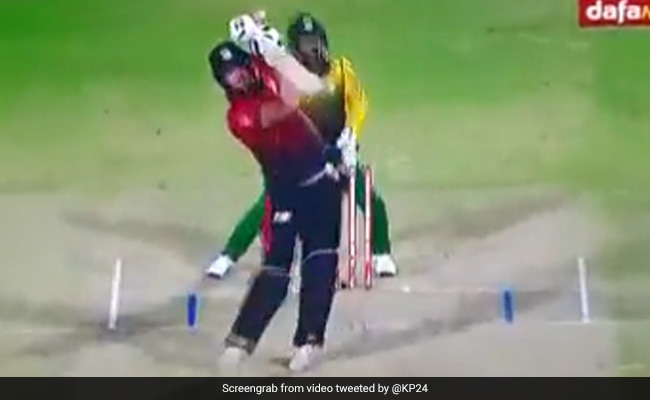 Former England captain Kevin Pietersen's blistering innings powered the World Giants to a comprehensive victory against the Asia Lions in a Legends League Cricket match at Al Ameret in Oman on Wednesday. Pietersen slammed a 38-ball 86-run innings as the World Giants cruised to the 150-run target in just 13 overs. The maverick right-hander rolled back the clock with some breathtaking strokes that once terrorized even the best of the bowlers across the globe.

Pietersen posted a small video of his innings with the caption "#AboutLastNight if you have a minute" on his official Twitter handle. The video shows Pietersen smashing the ball to all parts of the ground.

Pietersen, who attacked all the Asia Lions bowlers, was particularly severe against Asghar Afghan, hitting the former Afghanistan all-rounder for two sixes and as many fours in an over.

By the time Pietersen was dismissed by the legendary Muttiah Muralitharan, the Giants had already scored 128 in 10.4 overs.

Ireland's Kevin O'Brien then took over the mantle and scored an unbeaten 31 off 24 balls to see the Giants home.

Earlier, the Giants produced a disciplined bowling performance led by Morne Morkel, who returned with figures of two for 24.

Former England left-arm seamer Ryan Sidebottom too picked up two wickets for 38 runs while Brett Lee returned with figures of 1 for 27.

Former England left-arm spinner Monty Panesar too chipped in with a wicket and gave away only 22 runs in his four overs.

The Giants are currently leading the points table with two wins in their three matches. They are followed by the Lions and the India Maharajas.

Kevin Pietersen Cricket
Get the latest updates on ICC Women's Cricket World Cup 2022 and IPL 2022, check out the Schedule , Live Score and IPL Points Table. Like us on Facebook or follow us on Twitter for more sports updates. You can also download the NDTV Cricket app for Android or iOS.