Earlier this month, both Kapil Dev and MS Dhoni were in attendance to watch the US Open quarterfinals between Carlos Alcaraz Garcia and Jannik Sinner.

Former India captain MS Dhoni was spotted playing golf at the Kapil Dev-Grant Thornton Invitational 2022 event in Gurugram. Dev, who was also present at the scene, shared a picture alongside Dhoni. It is worth noting that both Dev and Dhoni are the only Indian captains to win the 50-over World Cup. While India won their maiden title in 1983 under the captaincy of Dev, Dhoni had led the team to their second ODI World Cup triumph in 2011 on home soil.

After Dev uploaded the picture of his from golf course on Friday, Bollywood actor Ranveeer Singh was quick to react. "WAH!" commented Ranveeer with a heart-eyes emoji. 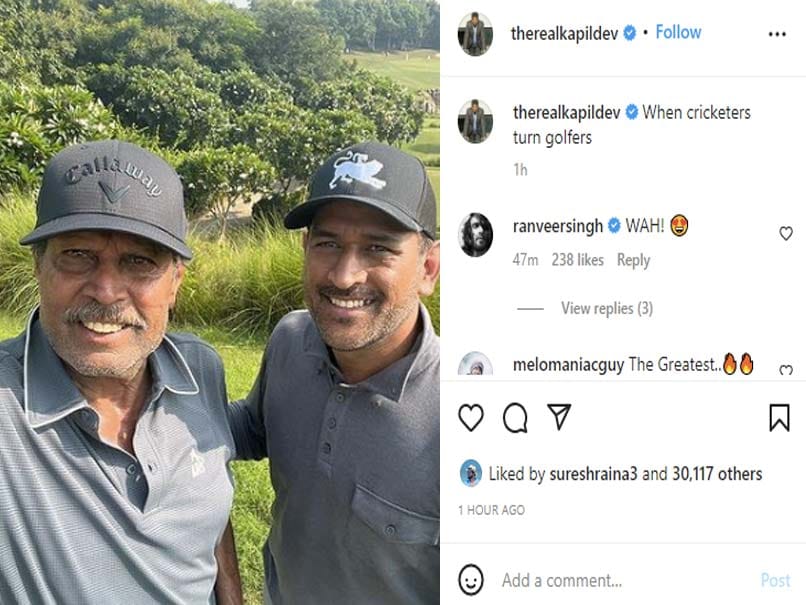 Earlier this month, both Dev and Dhoni were in attendance to watch the US Open quarterfinals between Carlos Alcaraz Garcia and Jannik Sinner. Kapil and Dhoni were spotted in the stands of the Arthur Ashe Stadium as the duo witnessed the five-set thriller between third seed Alcaraz and 11th seed Sinner.

Recently, Dev had shared his opinion on the controversial rule of dismissing the batters at the non-striker's end after he/she leaves the crease before the ball being released by the hand of the bowler.

The rule came under scrutiny once again when India's Deepti Sharma ran out England batter Charlie Dean in the third and final ODI between the sides last week.

Amid the debates over the mode of dismissal, Dev had suggested a new alternative for it.

"In a situation like this, I feel instead of intense debates every time there should be a simple rule. Deprive the batsmen of their run. It should be deemed a short run. It's a better solution in my mind." the World Cup-winning captain had written in his Instagram story.

MS Dhoni Kapil Dev Cricket
Get the latest updates on Fifa Worldcup 2022 and check out  Fifa World Cup Schedule, Stats and Live Cricket Score. Like us on Facebook or follow us on Twitter for more sports updates. You can also download the NDTV Cricket app for Android or iOS.